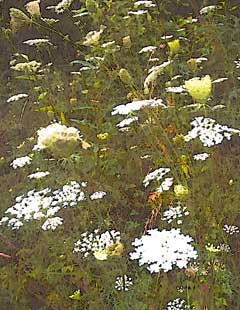 The grand daughters just arrived yesterday for their longest-ever stay on Goose Creek. Already, it’s been gratifying to find how much Abby (10), the older of the two, remembers from past visits to Dumpa and Granny Annie’s.Â  She reminded me on our first walk around the pasture about this story from at least five years ago. ~

You might know Queen Anne’s Lace. Its flat-topped inflorescence graces many meadows and roadside margins across a good swath of the country.

What you may not have noticed (but probably will, now that you know) is that there is often a single purple-black flower in the center of the cluster. Why? Even the experts don’t know.

Once when Abby was visiting, I challenged her to explore the pasture margins to find me a Queen Anne with a dark central flower. It didn’t take long for her to locate one by herself. She got really good at finding them, and it became a kind of game for us. “I bet those over there have it” I’d challenge, and off she’d run to see if I was right or wrong.

“Look Dumpa!” and she motioned me over to have a look at her discovery. There in the center of the flat-topped disk of tiny white flowers was a strikingly brilliant Deptford Pink she’d found among the tall grasses and secretly slipped it into the center of the Queen Anne’s Lace.

She grinned from ear to ear, telling a visual joke she knew grandpa would get. She had substituted the expected with the unexpected–which lies at the heart of humor. But more than the joke, I had the deep soul satisfaction of knowing I had passed on to our own personal next generation something worth knowing about the natural world.

She showed me in this AHA! discovery that she had learned to be surprised by nature–such a valuable insight in the outdoors–and that she could useÂ  new facts to surprise and delight others–a marriage of fact and humor, of precious and precocious wisdom. Yes!

This is one of the “child in nature” selections included in What We Hold In Our Hands: a Slow Road Reader