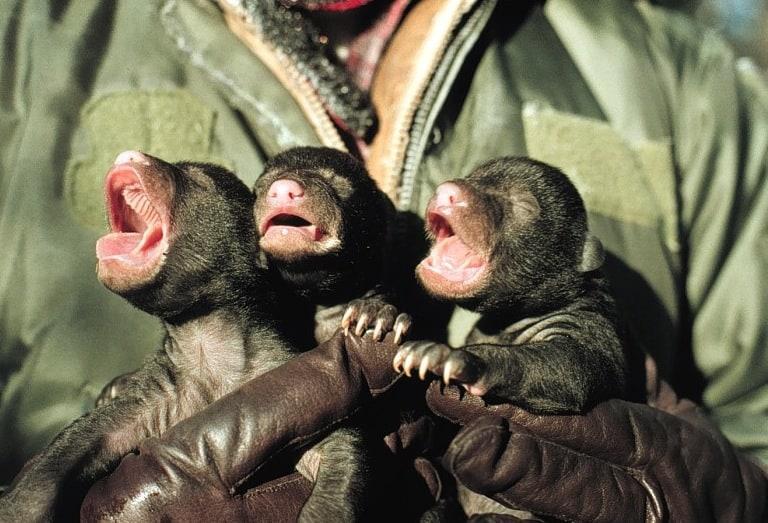 Again. Â Same place, same time of year as last. And Gandy the dog discovered it first. Actually, it was a THEM.

She always runs ahead of us down the road the follows the edge of the steep woods along the pasture that tumbles along besideÂ Nameless Creek.

Usually, when she bursts away from us, bounding on her back legs like a pronking antelope, it’s a squirrel she’s spotted just at the bend of the road.

So we didn’t think much about it when she bolted around the curveÂ today just ahead of us.

Fortunately, she came into view quickly, Â just as she was chasing a bear cub up a tree, the mother closing fast down on the dog.

Reflexively, I whistled and hooted and hollered GANDY COME! and she broke off the chase and zippedÂ past us 40 miles an hour, with four human appendages flailing the wind at a much lower rate of speed but in the same direction.

TheÂ bear wanted no more to do with us than we did with her or her baby (the smallest cub I’ve ever seen, probably just a few weeks old.)

In this same place last year, the mother bear chased the dog that raced past the wife who reached max heart rate, looking over her shoulder at the stereotypical lurching run of a large black bear eating upÂ the intervening distance.

Luckily, once sure her cub was no longer threatened, momma bearÂ gave up the chase. A few weeks later, Ann returned to resting heart rate.

Such is life in the woods.

2 thoughts on “The Bear Came Over the Mountain”