↓ Skip to Main Content
Home › Environment › earthcare › The Fungus Among Us: Yertsa

The Fungus Among Us: Yertsa 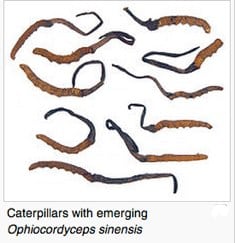 We’re promised rain this week. I’ll believe it when it’s in the rain gauge. But if we get the 100% coverage they say, it must might be timed with the remaining daytime warmth, to become a mushroom-hunter’s bonanza.

Most mushrooms (thought not all fungi) have a certain photographic appeal by their shapes, colors and “still life” aesthetics. Â No wonder they’ve had a magical appeal to so many for so long.

Some few fungi by some few brave or knowledgeable souls are edible, some even delicious, though I think they generally don’t have such great nutritional value.

And some fungi are just plain weird–but expensive. Like truffles. Or yertsa gunbu. What? You don’t know yertsa?

It is in a group of fungi in the genusÂ OphiocordycepsÂ that use ants and other insects to do its work. Â Yertsa uses a moth.

“The fungus Ophiocordyceps unilateralis is known for its parasitism on ants, in which it alters the behavior of the ants in such a way as to propagate itself more effectively.[6] The fungus attacks the brain of the ant, causing it to abandon its colony. The ant then bites into the fleshy part of a leaf and stays locked in that position until it dies. The fungus is then able to spread from the ant’s body to the leaf in order to repeat the cycle.” wikipediaÂ Â

Yersta gunbu, on the other hand, is an Ophiocordyceps species that might use humans to do its work.Â [I’m kidding, but then, maybe I’m not.]

And it is making peasants on the Tibetan plateau stronger, more virulent, smarter (all these are purported), and some, much richer. Yersta is big, big mycological business.

I first learned about it in this National Geographic article. The fungus emerges from the head of certain caterpillars and is plucked from the high-elevation grassy balds by the hands of entire families for months at a time. And the international trade in yertsa is successfully spreading the fungus around the world.

Some fungi have shrewd and very effective business models.

2 Comments on “The Fungus Among Us: Yertsa”