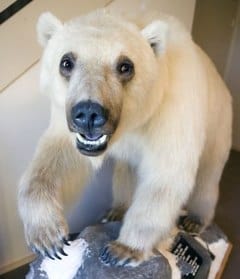 And apparently, they are still “post-zygotically” compatible so that hybrids–like this “pizzly bear” result. Polar meets grizzly. They share more than sperm and egg: both are on the US Endangered Species list. And in this way of blended genomes, both species as they’ve been known, are “lost.”

2 thoughts on “The New Grolar-Pizzly Bear”