I will confess that I was in college before I “got” maps. I don’t know if this coveted ignorance was because I was not curious enough to care about my bearings or my place in the landscape relative to anyplace else. Or did I find compass bearings difficult–me versus the map–and feel inadequate and not interested because maps “threatened” me in some way? I really don’t know.

I do know many adults never care for map reading, will defer to someone else–the designated “navigator” on a trip–because they don’t want anything to do with that kind of geographic detail. They might be able to follow word directions fine, but put a map in their hands and it might as well be written in Klingon.

I suppose there is a kind of abstract thinking that is necessary to comprehend “you are HERE” kinds of information. YOU aren’t THERE, but if you want to have a starting place, you have to imagine an objective-model you, a present, a here-and-now, that is the first step to moving in some direction in your travels–real or cartographic.

What started this ramble was a reminder about an incident I recorded briefly on my laptop from our South Dakota trip back in May. 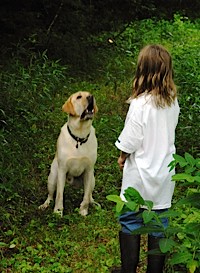 While we were there, I was exploring the Badlands on Google Earth. Seven year old grand daughter Abby walked by, and the usual question-barrage began.

I told her I was looking at a map of the part of the country where she lived. I figured that would be enough to make her eyes cross. But no, she wanted to know if we could see her town (Rapid City). I zoomed maybe 20 thousand feet up above her neighborhood.

“Where’s my house?” she asked, and we typed in her address and went down to seven thousand feet. Right away, she picked out her back yard, driveway, that sort of thing, looking straight down from above.

“Go that way to Jenny’s house” she said. I figured she made a lucky guess about the direction because she seemed to know which way to move.

“Now find my school” she ordered, and proceeded to tell me “that way”, then “more, more” and “STOP! That’s our playground.” 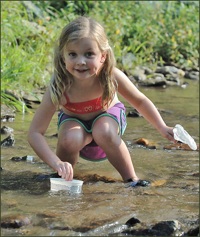 I was surprised how well she put herself in the map, compared pictorial representation from an uncommon, novel vantage point to realities on the ground, with an appropriate sense of up-down left-right software movements as it related to her physical geography. For a seven year old, that was to me a surprising ability.

Abby is no stranger to computers, to “mousing” for instance, where hand movements are representational of screen movements which in turn relate to “maps” of virtual spaces of computer games. I wonder if, in spite all the obvious negatives of computer use in young people, if “getting the map” is one benefit?

Now, if we could just get her outside to play in that neighborhood shown on Google Earth and not just when she comes to Goose Creek.

4 thoughts on “Toward a Well-oriented Childhood”