Wild Kingdom Come: For Our Chickens 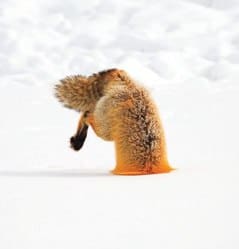 I told you a few weeks back that the coyotes got our hens. There were feathers all over the pen, and Ann found two carcasses of the black hens, Beta and Myrtle, out in the pasture.

What I didn’t tell you is that the next morning, Gandy (during her first week with us) and Ann discovered the red hen, Pearl, alive, down in the creek bed, nearly frozen. The thermometer had dipped almost into the single digits that night, and it seems a miracle that she survived.

For the next week, she would barely come out of her house even for food or water. In the past week or so, however, and particularly when the weather is less harsh, we open the pen gate around noon. She comes across the creek and has taken up regular residence just off the back porch. She was fearful and aloof and avoided us before, but now we are her only flock, and she seeks out our company.

A couple of days ago, just about the time I was thinking I should herd her back over to her pen, I heard her squawking out front. I jumped up and ran to the door to find a massive, mostly-black coon chasing her down the road. He didn’t even bother to look up when I hollered from the porch. I ran down in my socks, found a large rock, and hurled it soccer-fashion into the creek near the coon. He scampered up the nearest walnut tree, while I ran inside for the gun.

By the time I got back out, he was lumbering his way across the creek. The chicken was nowhere to be found. I assumed she would hide until dark, at which time the raccoon, the coyotes, wild dogs or some other predator would scatter her red feathers for us to discover on a future walk. But just before dark, I heard her calling far behind the house and coaxed her back home.

Yesterday, a fox explored the pasture in broad daylight, hunting for rodents. It’s uncommon to get more than a glimpse of a fox during the daylight hours; we’ve seen them pass through, during mating season, but I got to watch this one hunt. Her technique was not much different from Tsuga’s–nose-driven, but also attending to faint sounds of digging and scurrying under the matted pasture grass.

At one point, she paused, lifted one paw, cocked her head, then leaped far higher than the 80# Tsuga, tucked her legs under her, and spiked her head, nose first in the grass. She came up with the fattest rodent I’ve ever seen–too big to be a mole or a mouse as I watched through binoculars. And then she coursed back and forth on down the pasture, paying no attention to the chicken pen–whose gate was thankfully still closed at the time.

If the bold fox comes back during the day again, chances are she’ll be far quicker at grabbing the chicken than the coon was. And chances are, I won’t be able to do a darned thing about it.

2 Comments on “Wild Kingdom Come: For Our Chickens”