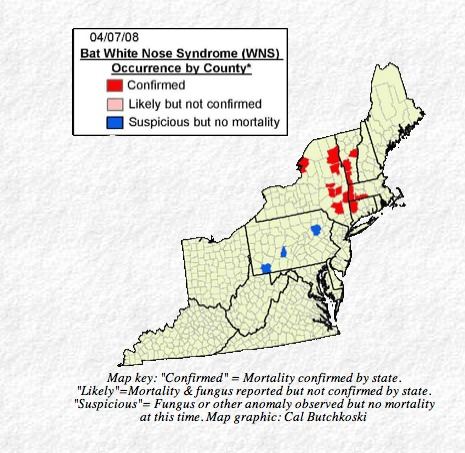 Are you keeping up with White Nose Syndrome as wildlife scientists continue to search for an explanation and fears of spring bat movements put other states beyond the four known to harbor the condition on alert? In Pennsylvania and West Virginia, dead bats are being tested to rule out WNS and no cases in those states have been confirmed.

Batmanagement.com (map source) has what is probably the first organized focus I’ve seen on WNS that was presented in a poster presentation last summer (2007) by Alan Hicks who continues to study the condition. Notable from the poster (pdf) is the unusual high temps in the studied caves and the season overall, though it is not known to what degree higher than normal temperatures may contribute to the bats “death by starvation.”

What does seem certain is that, as I learned in ecology class so long ago, “you can never do just one thing.” As insectivores with massive appetites, the absence or reduction of summer bats will mean more of their food stays in the air and on munching on food crops. Also related to warmer temps andÂ  of note on the mosquito front…

As the warm season sets in, the risk for the West Nile virus to manifest becomes higher as mosquito populations increase numbers. The season normally begins in April and lasts until September, but due to warm weather this year, the first cases of the West Nile virus have been reported as early as March 19.