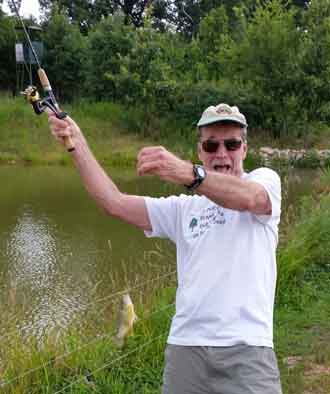 I would never have thought it possible: I have gone–what?–maybe twenty years since the last time I held a fishing pole.

Growing up southern and outdoorsy, there were not many weeks go by I did not either go or desperately long to go fishing.

In this theatrical pondside image from our recent Missouri trip, I have just caught my umpteenth hybrid bluegill on a bare hook. All together, they might have weighed a pound. Where were those 3 pound catfish we fed in that same pondÂ the day before?

I once had the opportunity to have a dinner-chat with Richard Louv, author of Last Child in the Woods. We quickly found common ground (imagine!) on the topic of fishing. It was the mystery of what lay below the surface of any pond, river, surf or lake that “hooked” both of us initially into a life-long fascination with and devotion to the restorative powers of the outdoors.

And so, having pulled in these lunkers last week, smelling the wonderful stink of fish on my hands, hooking my first earthworm in a quarter century, feeling the tug on the line from the invisible–having fished: I am a better man.

The bad news: too many kids have put themselves on house arrest, a sequester reinforced by outdoor-indifferent, overprotective parents (who don’t and probably never did fish growing up.)

The good news: fishing skills, knowledge and encouragement is happening, even in the schools! I doÂ know that the Blue Ridge Discovery Center in Grayson County is supporting such programs in our area.

So the bottom line: if you used to fish and don’t any more, reconsider. And when you wet your first line again, have one or more children beside you. It could very well change the course of the rest of their young lives. And we so desperately need earth-advocates more than we need more shoppers, consumers and phobics!