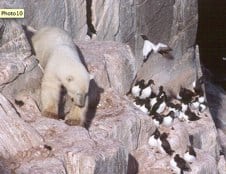 So what if birds fly south later or polar bears have to leave the disappearing sea ice earlier. Big deal. What do we care, say those who are happy if their own personal plans are not threatened this week by global climate chaos.

Tell that to the snow geese and murres. Polar bears are becoming resourceful–apparently independently in different locations discovering the same new source of food–by going places they typically have not gone and anatomically are not designed to safely go.

Mountain goats, they are not. Look at the size of them, perched on the vertical side of a cliff, with their big soft, flat paws– not the spiked crampons of a mountain goat by any means. And the nesting birds are not adapted to hide or protect their nests, evolved where such predation has not until now been an issue.

This is just one instance of how global climate shift will continue to disrupt ecological relationships in place for tens of thousand generations and more. Little wonder the coming era is being called the Sixth Extinction or the “Anthropocene” and will likely extinguish an enormous number of the species we grew up with.

Have we grown so numerous and so invasive that there is no more “wild” left? Mankind has permanently altered nature to the extent that

* There’s nearly six times as much water held in storage (e.g., behind dams) as there is in free-flowing rivers.
* About 50 percent of the world’s surface area has been converted to grazing land or cultivated crops.
* And only 17 percent of the world’s land area in 1995 was untouched by the direct influence of humans (such as agriculture, roads or even nighttime lights

“There really is no such thing as nature untainted by people,” write the authors. “In the modern world, wilderness is more commonly a management and regulatory designation than truly a system without a human imprint.”

Bill McKibben says our children and all those who come after us will inherit a planet so foreign, we need to change its name–from the familiar Earth to the vaguely familiar alien-flavored Eaarth.

That new planet is filled with new binds and traps. A changing world costs large sums to defend–think of the money that went to repair New Orleans, or the trillions it will take to transform our energy systems. But the endless economic growth that could underwrite such largesse depends on the stable planet we’ve managed to damage and degrade. We can’t rely on old habits any longer.

Our hope depends, McKibben argues, on scaling back–on building the kind of societies and economies that can hunker down, concentrate on essentials, and create the type of community (in the neighborhood, but also on the Internet) that will allow us to weather trouble on an unprecedented scale. Change–fundamental change–is our best hope on a planet suddenly and violently out of balance.

Someone asked me the other day if I didn’t feel like we were living in a science fiction novel of epic proportion. The answer is yes. But this is no fiction. And we are not characters stuck by fate in an unalterable script. But we are not far from that fate.

And in the novel, I imagine: the people out of necessity come to like the taste of ants and acorns.