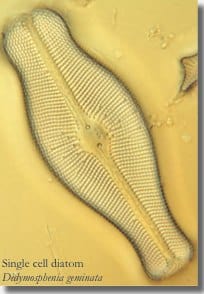 In places like Colorado and parts of Canada this benign diatom has changed for the worst. Why, it is not yet known–environmental changes in the water (warmer, pH changes, more or different agricultural runoff?) or a spreading genetic mutation that is changing the behavior and growth patterns for this phytoplanktonic creature. But it bodes ill for riverine aquatic insect habitat, and from that, for trout and other fish and the aquatic food web in general.

Take a good look at Rock Snot. One at a time, Didymo is rather lovely in its little silicon pill-box container. If you discover it spreading unchecked, spreading its toilet-paper stringyness in other Southwest Virginia or Southern Appalachian clear, cold waters, follow the precautions against spread, and be sure your local Environmental Quality people know about it. Fishermen, especially, follow the guidelines in the Virginia poster to avoid bringing Didymo into the Little River system in Floyd County. Un-disenfected felt-bottom hip waders seem a major agent of spread.

Didymo in Wikipedia (see US states where it has recently spread)