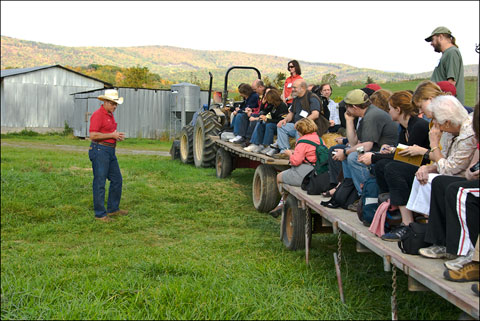 The sun rose to our right beyond wave after wave of blue ridge as the bus headed north along I-81 on Thursday morning–Day 2 of the SEJ conference. Touring journalists could not have asked for better weather for the two hour bus ride north from Hotel Roanoke to Polyface Farm near Staunton.

Following the mission of giving tour attendees the most possible information bang for their buck, an informational data-stream was offered by a number of guides, leaders and experts who took their turn swaying at the front of the bus with a microphone, their purpose–to help us understand what we would be seeing and better understand how the diversified 550 acre Polyface farm fits into the context of future farming practice, not just in Virginia but as a model for a successful and sustainable national bottom-up agriculture.

Tour leaders freelance journalists Joseph Davis and Christine Heinrick and Senior Rodale Institute Editor Dan Sullivan deserve the credit for arrangements at the day’s destinations, coordinating travel, and arranging for the lunch meal (provided by Chipotle and enjoyed at the Frontier Culture Museum near Staunton.)

I took copious notes that day–my handwritting under the best of conditions I can barely read. Taken on a bus at 70 mph, it seems I lapsed into Klingon. I’d planned a long narrative of the trip but life intruded. So I’ll offer a lesser recap in snippets with a few pix, probably in two parts.

Speaker Lyle Estill was a business major before life imposed different directions for him (as one’s occupational life often does.) In 2002 a search for something useful to do with several gallons of used oil from deep frying some left-over turkey began his unexpected career in turning fats into fuels.

He is now co-owner of Piedmont Biofuels whose production from various organic oils and fats has surpassed a million gallons a year. During the past six years, Lyle has learned a lot of biology, chemistry and carbon math. What’s more, he is very passionate and articulate about his experience and his future energy hopes–and his misgivings–about supplanting fossil fuels with bio-fuels of any stripe, especially when food crops are the source. His well-reasoned and informed position is offered–among many other places–in this recent essay.

So this would probably be a good place to end for today and begin in part two where I’ll be better able to read my notes taken from the moving haywagon navigated across Polyface Farm by Joel Salatin–whose erudite and highly-impassioned monologue would fill an entire notepad. I’ll offer more snippets.