↓ Skip to Main Content
Home › Environment › earthcare › The Oceans: Not Too Big to Fail

The Oceans: Not Too Big to Fail 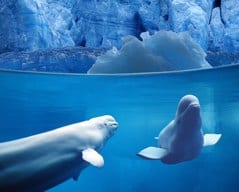 Let’s imagine for a moment that we live in a fictional future world–a world where, for fifty years, the planet’s plant life on land has been dying at the rate of about one percent per year. You can see the gaunt shadows of dead tulip poplars and maples out your windows now. Your garden has failed completely the past two years. This global illness threatens critical and permanent damage to terrestrial ecological balance and will result in massive extinctions and food shortages, not to mention the fact that much of the living world’s oxygen is produced by this plant life, of which there is visibly less and less each year.

If you lived in such a world, you’d be desperately concerned for the generations to come if the causes of this planetary sickness could be identified but were not being dealt with, though solutions were possible but difficult.

Now, back to real-world non-fiction. Imagine my shock in late July when I read the disturbing news that this same magnitude of loss of plant life seems to have been happening beyond our view, in our oceans, for a century. The smallest photosynthetic organisms called phytoplankton have declined by 40% over that short span of 100 years, and most of that loss has happened in the past 50 years. These “forests and grasslands” of the sea are steadily dying. Let’s look briefly at what this may mean to our future, and then at some factors that may contribute to the problem.

Phytoplankton are the sun-powered marine creatures that have the capability to take a variety of dissolved minerals from the water and CO2 from the atmosphere and convert them into sugars and starches using chlorophyll in the same way that wheat and walnut trees do. On land or sea, photosynthetic creatures are the “primary producers” upon which all the consumers above in this web of life depend for both nutrients and oxygen.

It was easy to understand the risks associated with large losses to this life-support role that green things play on land, as we imagined earlier with a fictional scenario. It is a little harder when it comes to the invisible oceans, but the consequences to the planet are no less critical. As phytoplankton levels decline, so do zooplankton, small fish, bigger fish, whales, seals, seabirds and ocean-derived foods in the human diet–and the industries and livelihoods that go with them.

The primary reason for the recently discovered phytoplankton decline is thought to include temperature changes over the last century in the world’s oceans. With seas warming, nutrients that sink to the cold, deep sediments less effectively circulate back up into the warm, upper levels where photosynthetic organisms live and grow. In our terrestrial world, this kind of break in the nutrient cycle would be as if an increasingly-impenetrable barrier was growing between the soil and the roots of trees and grasses, and they weaken and die.

Two additional threats to phytoplankton are increased ocean methane levels and increasing ocean acidity, both problems related to warmer seas and increasing CO2 levels. As warmer ocean waters destabilize methane deposits frozen in deep ocean sea floors, methane gas becomes a feast for massive blooms of specialist microbes that use it as a food source. The CO2 they then release into solution in the seawater adds to the elevated carbon dioxide levels already present due to the 392 parts per million CO2 in the atmosphere, the highest in the past 800 thousand years.

Acidification affects the basic chemistry of the seas. It leads, among other consequences, to the dissolving of calcium shells–such as those of clams and corals and of crustaceans like shrimp, crabs, and especially the tiny krill upon which large top-level organisms like whales feed. Some of the most abundant phytoplankton species also create calcium-based shells. Under conditions of slow change over long geological spans of times, they might adapt to the more acid conditions; in the geological instant of the present century of change, the future of phytoplankton is uncertain.

The fate of phytoplankton should move toward the top of a long list of concerns about increasing greenhouse gases. This food-web crisis goes on invisibly to us living far from the coast and well below the radar of our inert politicians, while the disappearance of a significant portion of sea life may become more a probability of science fact than futuristic projection of science fiction.Â Fred’s Sources aggregated and annotated at diigo and posted at Posterous.

1 Comment on “The Oceans: Not Too Big to Fail”