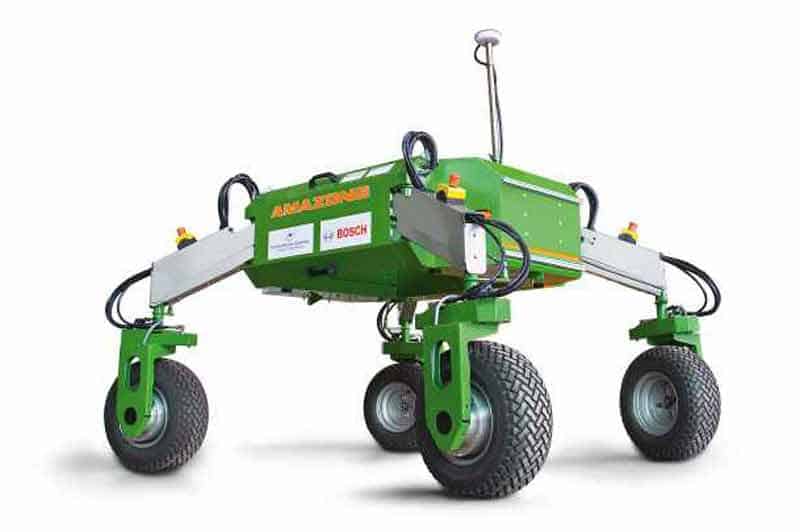 Don’t get me wrong: the bigger-hammer folks still prevail in the arena of strip-mining the soil for maximizing profit from monoculture-derived soy, corn, cotton and the like.

And granted, the insects and weeds still either have or are evolving the upper hand. Again.

But Monsanto-Bayer, Bosch and John Deere are seeing in this another opportunity to make a buck while seeming-GREEN. Yet again, the upper hand against an uncooperative NATURE is (wait for it): more technological fixes.

Meanwhile, in another sad statement of the state of affairs, natural predators are being replaced by yet another robot–a smaller hammer: a tiny mechanical spider is being developed, soon perhaps to be released in large numbers, to provide the environmental services that biological spiders and other predators could have effectively performed once upon a time.

Not to worry. We Know Better. We’ll fix whatever is broken–meaning whatever buggers with efficiency or profit. Nature is just too sloppy and slow for Modern Man in the Anthropocene. Move over, let our engineers show you how it’s done.

And I don’t think I like where this story is headed, but then I’ll only get to the middle of the book before the lights go out.

Should we, in the last chapter, do ourselves in, it wouldn’t be the first time that a major extinction was caused by the “environmental tinkering” of Earth’s creatures, though such a feat has never before been brought on by a single species. We really are something special.

See: Evidence that Earth’s first mass extinction was caused by critters not catastrophe

2 thoughts on “The Smaller-Hammer Approach”