On the Cumberland Plateau: that’s where.Â  But it took me a while to get oriented, even having grown up a two hour drive southwest of Chattanooga.

I well remember as a child: the sandstone bluffs become notable driving up from Birmingham and give the sense of being in the mountains, the scenery becoming suddenly UP, even though the relief is modest in most places.

Our purpose of our field excursion to Suwanee a week ago today was to focus on the “Biodiversity of the Cumberland Plateau.”Â  How that geology and nomenclature meshed with the language I have understood to describe the where of my life in the Appalachians took a little sorting out.

So before I say much more about the field trip, I’ll tell you a bit more about WHERE and WHAT the Cumberland Plateau is.

Firstly, you probably know the history of western migration from the past centuries of continental swarming into other people’s places to call our own.

You have heard, then, of Cumberland Gap, and might appreciate why this discovery by Daniel Boone made him the equivalent of today’s first man on the moon.

Suddenly, looming before them as they traveled the relatively easy passage of the Great Valley loomed the Cumberlands. The map below shows the barricade of rock (in orange) that struck horror into the pioneers in their oxcarts. 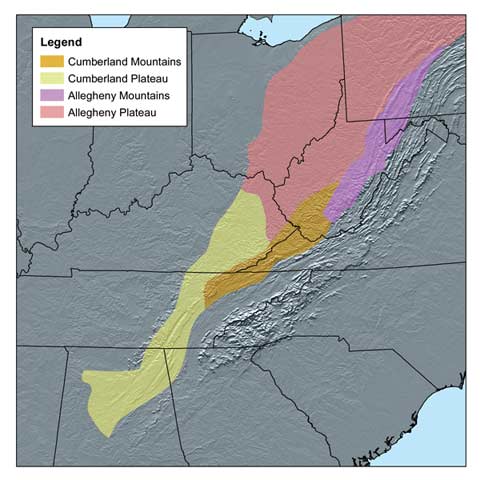 So the Cumberland Plateau is the same geology as the Allegheny Highlands, just by a different name. That confused me.

It extends into Alabama and Red Mountain outside my grammar school window is near the southernmost terminus of that geographical province. This map helps me sort all this out as a “son of Appalachia” by birth and by choice since then.

And the one below (see larger version scroll down at this link) brings the ground under my feet into this story.

Yesterday I joined the students at Blue Mt High School on the property of a friend for a hike. We stood on her back porch looking north over the uplifted Blue Ridge plateau of Floyd County. The average elevation below us was something like 2500 feet, with her ridge and the one we live beyond, visible in the distance, at 2700. I thought it was a good opportunity to speak to them, in advance of Monday’s wide-ranging class on Cosmic Geography, about where they were.

Beyond that rim of crystalline ancient Blue Ridge geology, the land falls off into the softer, newer Ridge and Valley (whose stream-carved bottoms allowed for the Wilderness Trail of western migration historically). Almost visible were the eastern-most “mountains” of the Allegheny-Cumberlands. Â Behind us, to the south of us a few miles yesterday was the Blue Ridge Parkway that rides the escarpment as it falls precipitously toward the Southern Piedmont of Carolina.

Okay. I’m grounded now. And we could travel on from here, except I am out of keystrokes for a while. More about Suwanee, biodiversity and the future, perhaps another time.