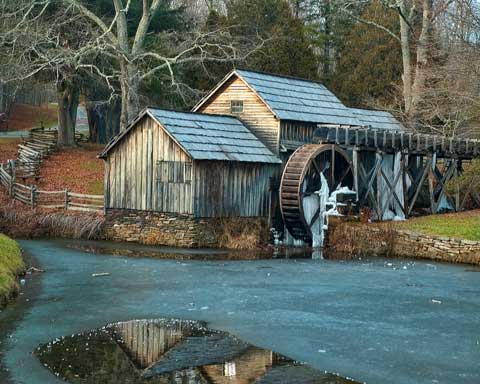 A stroll in the December archives finds this image [click to enlarge] from early December, 2007. I had been manning a book table at the Chateau Morrisette Winery Wine Club members banquet (what a nice invitation, I met lots of nice folks and sold 50+ books).

Somebody asked if I’d seen the mill pond covered with ice. Soon as I left (in my fancy clothes) I headed a few miles west on the Parkway and came home with the shot you see above–one of my personal favorites of the thousands I’ve seen of the “most photographed place on the Blue Ridge Parkway: Mabry Mill.

By the way, google searches find this and similar images at Fragments from Floyd most often searching for “Mayberry Mill”–a logical misspelling since it’s only maybe 25 air miles from Andy Griffith’s Mt. Pilot (Pilot Mountain near Mt. Airy) and the fictional sleepy village by that name.