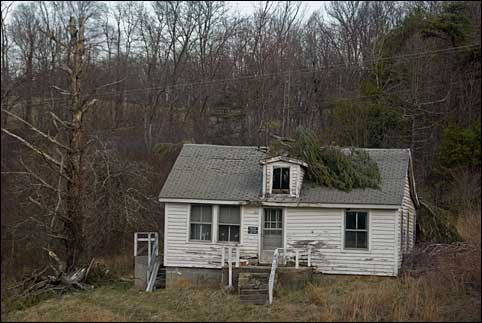 It has been years since I visited a home health physical therapy patient in this house I pass on one of my alternate routes into Floyd.

On my first visit, a tiny black woman came to the door, her small dog yipping nervously beside her, jumping against her legs.

“You must be Mabel Lawson” I said, glancing at the chart in my clipboard to confirm the address.

“Harumphhh” she snorted. “Mabel Lawson–I don’t know ’bout that. They took a gall bladder. The took most of a stomach and all them other innards in there. Ain’t much a’ Mabel left. But I guess I’m what’s left of ‘er. ”

She has since passed on and her house abandoned. I wonder what happened to her little dog that came to accept me after half a dozen visits. And now her house suffers decrepitude, taking on the aspect of its former owner.

They ain’t much left uvvit.