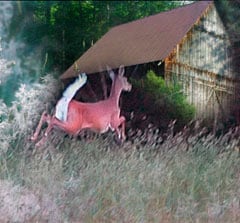 A young man–a late teen-ager, stopped his car in our drive and left the motor running. HeÂ approached the house and I went out to see what he wanted.

He introduced himself and explained he was looking for a place to hunt and would we give him permission.

I was reluctant to give someone else permission, since we had already told several that, if they called ahead and it did not conflict with our outdoor plans for the day, they were welcome to come.

But he went on to explain where he lived (not far from here, in southern Montgomery County) and that any deer he killed would be used for his extended family, in which folks were without jobs and food was getting scarce.

He was a very courteous young man, and he has come a time or two. A few days after his first visit, his father asked to hunt, and has been out several times, always calling for permission. He has had good luck, and taken several does, the last one, this morning.

I went over to talk to him as he drug the carcass to his truck. I asked him about the shot we had heard well before it was light enough to see what you were shooting at.

“That wasn’t me. That was a young kid shooting at me up on the ridge. And I even had a flashlight on. He begged me not to tell his daddy who would beat heck out of him. He was about as scared by it as I was.” He went on to tell that, hunting in the national forest once, he had his hat shot off him.

He had already told me about two deer stands on this particular ridge, one with permission, the other, not. And this morning he said he avoids our east ridge because “there are so many deer stands up there it’s like a small city.”

These might be on our side of the ridge or the neighbor’s–the one whose land was raped by loggers so that there is not no cover over many dozen acres and a hunter just shoots fish in a barrel.

We still don’t know which of these delightful uninvited visitors threw our lawn chairs in the creek, back up around the bend, but thank you very much. You contribute significantly to the bad reputation that hunters too often deserve when they treat everybody’s land as their own, and treat none of it with respect.