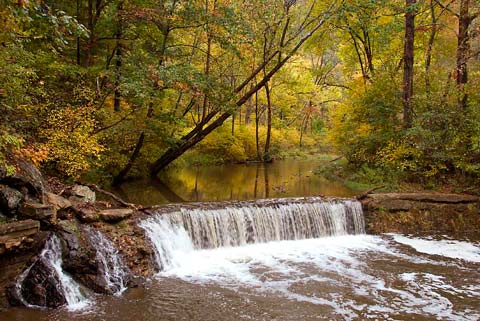 …The landmass known today as Floyd County lies not far in miles from this Great Valley of Western migration approximately following the route of Interstate 81 and Highway 11. Primitive forts were established along the headwaters of the Roanoke River, in Salem and Shawsville, and early travelers would have taken a notice of the clear, cold South Fork of that river that follows the gentle grade south along today’s Allegheny Spring Road.

Waterways were often arteries of migration, providing gentler grades through the hard rock of the mountains, offering a crude passage into unexplored territory–not to mention power for mills and water for drinking and livestock of any settlements that might be established along them.

But some 7 miles upstream from Shawsville, settlement and travels probably stopped at the landmark that Ann and I call the “three bridges” at the Montgomery County — Floyd County line. Here Bottom Creek and Goose Creek join to form the South Fork of the Roanoke River. Upstream from that point, the would-be traveler enters the gorge created by Goose Creek (the eastern-most source for as well as the original name for the Roanoke River), on whose headwaters we live.

At the county line, the banks are extremely rocky, a hundred feet high, and forbidding. The first settler to enter Floyd County by this goat path was indeed a hardy soul, and probably not looking for fertile tillable soil but rather isolation, cold creek water, and a source for corn. [goose Creek has also been referred to as flat run; what I call nameless Creek has been called by one resident Wolf creek, but I cannot find that substantiated anywhere else.]