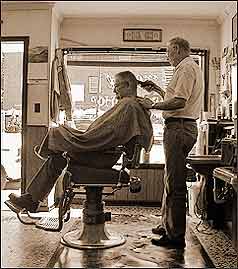 I’ve been browsing back through the blog archives here lately, and often find myself smiling and nodding, resurrecting days and seasons worth a second look. So I thought I’d share a few of these along. Might even be that one or two of you will remember a couple, like this one from February 2004.

It was standing room only yesterday in the Floyd Barber Shop where Ralph presides now and for the last–what–thirty years? Monday, even in the snow, he made it to work somehow, hung out for a while, shoveled off the sidewalk, and then just went on home.

It was a really slow day, nobody much stirring. And a Monday, to boot. Tuesday, the roads to town were clear and a few parking places opened up in the drab snow banks along Main Street. And so cabin-bound old men in overalls drove dirty trucks to town, rusty truck beds immaculate under a foot of white. Â For certain, some of these fellows used the haircut as an excuse to escape from the house for an hour, even though what little they had under their caps could have easily waited another few weeks–or months–for a trimming.

Off the snow, so much light is reflected up through the front window of the shop that it seemed like studio lighting, casting moving shadows from beyond the painted window, deep against the farthest wall where dingy old posters, seldom seen in the typical gloom, announce long-past blue grass performances.

In the odd brightness the place seemed less nostalgic of the forties than it typically does. It seemed almost modern by Floyd standards. And this burst of illumination was a good thing for those of us gathered there waiting to be shorn. Ralph cuts hair by natural light, mostly. You want to be sure and go mornings of a sunny day for the best cut when the surgical field will be well lit.

And go, too, before the conversation gets so interesting that your part on the left gets lost in talk about the damned hippies and how nothing is the same as it usta be and who was playing the Buffaloes this week and who’s up first this coming Friday night at the Jamboree. ‘course you could part it on the right for a while. Just keep your cap on til next time. 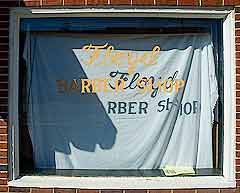 We were old men and one little boy, maybe not quite two, having if not the first, one of. He was apprehensive but brave, although you could see him almost panic when Ralph enforced the “all hands under the frock” rule. Escape seemed unlikely if you couldn’t even use your hands against your captor. All in all, the very young man showed remarkable courage sitting up on the one-by-twelve pine board over the armrest of the ancient red-leather chair, perched there like reluctant royalty, swathed in a royal blue robe. Platinum curls fell to the worn linoleum floor, scuffed through to the concrete underneath.

But it was bravery sustained by distraction.Â The elderly gentleman next to me played the clown as Ralph singled him out for Little Boy to focus on. (Who can blame the kid for wanting to see what it was making those beak-snapping noises just above his right ear. And how could he see if he didn’t turn his head?) Voices seemed to be less interesting than visual effects to Little Boy so Clown resorted first to holding up fingers to count–a concept whose time had not quite come to the audience under the shears. Finally, Old Man found the magic: Here’s the church. Here’s the steeple. Open it up, and here’s all the people. Little Boy was mesmerized. And so we saw the people again and again. And you could see little hands moving under the frock, wondering if those people were in his hands, too.

And Ralph said “Why, that’s clever. I never saw that before”.

Law, I thought it was required that all children play that game with the toys we were born with. (Yeah, that one too.) No, Ralph had somehow missed that one. And Little Boy slipped down off the board bench and onto the chair seat and on down it like a sliding board, onto the ornate footplate from whence he stepped into the floor festooned with his curling golden rites of passage.

Chances are, hair growing like it does, Little Boy and I will be there at Ralph’s again some sunny morning when the lighting is good, in about a month. And as he wiggles there under the cape and turns to see the whirring shears, I’ll say “Hey. L’il Boy. Wanna see my Junior Birdman goggles?”

And, of course, I’ll have to sing the song. Ralph’ll say, “well I never heard that one!”Â [Ralph retired in 2006. I’ve not been back since then. It just wouldn’t be the same.]

And When you hear the mailman whistle
and you get your wings of tin.
Then you know that Junior Birdmen,
have sent their box tops in.*