In Praise of the Wolf Peach

fred Posted on August 18, 2011 Posted in Floyd County, From the Soil 6 Comments 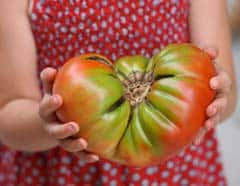 Before I go on, be sure to mark your calendars for the Top Tomato event at the Floyd Community Market next Saturday, August 27. See details at the SustainFloyd web site. And thanks to Woody Crenshaw for the photo of past year’s prize winner for size. It was a whopper! And now, about that wolf peach…

It is, in fact, a giant berry, technically a fruit. And it has been variously misunderstood, feared, loathed and praised during its several thousand years on–and off–the world’s grocery list.

It’s attractiveness alone compelled the earliest European explorers to export its showy, fleshy fruits around the world from its probable place of origin in Peru.

But its permanent place in human food culture has only recently been assured. This oft-maligned plant has been plagued by superstitions and a bad reputation for some centuries because of its family resemblance to unsavory kin. Be careful who you hang out with.

Our plant in question had disreputable relatives that were once believed by German folklore to be used by witches to conjure up werewolves. Its scientific name, Lycopersicon esculentum, is a latin binomial that literally means “edible wolf peach.”

Other recognizable relatives that bear similar flowers and fruits were known hallucinogens, remarkable for inducing the sense of flying. We know the fatal end afflicted by the righteous upon women who reported such unearthly experiences, when the source was really just something earthy they had for lunch.

Insult to injury, the juice of the wolf peach, being acid, caused lead to leach out of pewter dinnerware used by the rich, leading to lead poisoning and death. The blame was placed on the food and not the plate it was served on; and there must have been all sorts of speculation why the poor experienced no ill effects at all. (They ate off wooden plates!)

Renaissance botanists perpetuated the stories of its poisonous qualities, even though the Aztecs had been happily eating the fruit for ages. Later, the golden berries were considered an aphrodisiac, and known as the “love apple.”

But at last, our palates have held sway over our food fears, and we have embraced this member of the nightshade family by the summer bucket-full. We call it by a title that preserves its Aztec name, the tomatl.

Italians had welcomed the tomato to their wooden plates early on, and brought it with them to America. And what really secured a place for this botanical fruit, legally classified later as a vegetable, was its use in making pizza–a national celebratory dish of white dough, green basil and generous slathering of red tomato sauce, representing the colors of the Italian flag.

Worldwide, some 100 million tons of fresh tomatoes are grown, and we eat about 20 pounds apiece in the US. Tomato Is second only to its cousin, the potato, in vegetable consumption. And as it turns out for a change, this popular component of our diet is actually not bad for us.

Recent dietary findings show fresh tomatoes are the biggest source of dietary lycopene, a powerful antioxidant, whose effectiveness and bioavailability is increased by heating–which is not the case for most other fresh fruits and vegetables. Benefits of tomato consumption still under study include reduced risk of heart disease and some cancers.

But the $5 billion worth of factory-farmed tomatoes eaten in America are too often devoid of flavor and low in nutrition, a mere dietary understudy of its Peruvian ancestor.

It seems that, in the agri-business of breeding a tomato whose chief quality is its ability to survive long-distance shipping, tomatoes have, since the 1960s, lost 30% of their Vitamin C and have 62% less calcium–but 14 times as much sodium. And the mealy, rock-hard pink orbs have all the flavor appeal of a lump of styrofoam.

Industrial extraction of commercial tomatoes (largely from Florida and California) produces a product whose price may be low, but the mass-produced tomato’s cost is very high.

Barry Estabrook’s recent Tomatoland exposes the social, environmental and nutritional cost of strip-mining this high-dollar, high-demand fruit. The soil, the people who work the fields and the consumers who have settled for tasteless winter salads are the losers.

Meanwhile in a Floyd County summer, the real deal is easy to find in all its forms–hybrids and heirlooms, beefsteak and cherry–fresh from the vine or from a local market.

And on any given August afternoon, a big ol’ slice of wolf peach with a little salt and pepper can make a soul feel like it is flying!

6 Comments on “In Praise of the Wolf Peach”