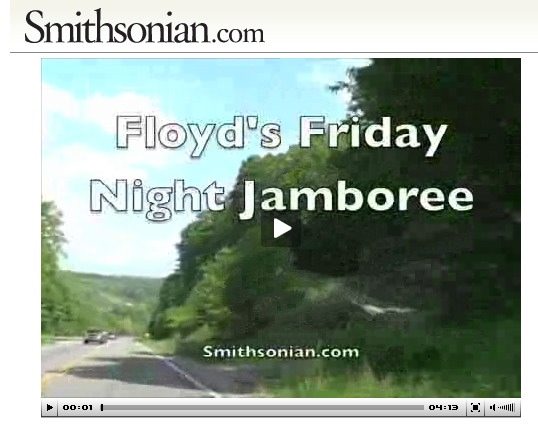 I am hesitant to point to anything that points toward Floyd County, not wanting to be accused of being the Pied Piper of the area. (There are plenty of realtors who wear that red cape and floppy hat.)Â  As I have told folks who rightly point out the dangers of saying too many nice things about an area prone to the same excessive development that has sadly and inexorably lead to the strip-mallification of other small towns, at this time in my life, I’d be looking for, finding and writing about the good and the beautiful–promoting life and sense of place in general rather than any place in particular.

It just turns out that what I write about where I chance to live is widely available via the blog to those whose interest in the area is high well before they discover the bloggers of Floyd.

So with that preamble and caveat, I’ll tell you that back about six weeks ago, I spent some time with a couple of young fellas (more and more fellas are thus) from Smithsonian magazine, our meeting coming about by way of the weblog.

I introduced them to Doug Thompson and Mac Traynham and others. They spent the weekend in Floyd, and from their time here has come a Smithsonian.com People and Places article, Blue Ridge Bluegrass and a short video specifically about the music environment in Floyd.

Several of the people in the video and article comment gratefully that the growth and improvements in Floyd have not been at the expense of its scale and authenticity and pedestrian-friendliness. Keeping this balance will be a challenge in the decades ahead.

There’s no putting the genie back in the bottle. But I’d like to believe with a certain level of care, respect and vigilance to maintain what is precious about this place, both those who come here to visit, dance and sing, and those of us who live here can love the rhythms of Floyd without loving it to death.