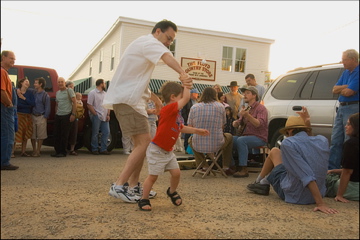 That the old has become new–without abandoning the comfortable scale and pace of the old–is a noteworthy–and newsworthy– feature of today’s downtown Floyd. Small is beautiful. Others towns are noticing how this growing phase is shaping up…

To prevent strip malls from moving into suburban areas of town, Floyd officials and property owners are working together to convert old downtown buildings into new commercial and residential space.

The concept, known as “adaptive re-use,” is also being explored in Giles, Pulaski, Wise and Scott counties, according to downtown Floyd property owner Woody Crenshaw, who said he’s been contacted by people in those communities about what steps Floyd has taken to preserve its local character.[NRV Roanoke Times 20 April 08]

In all this make-over, can prosperity happen without becoming the Midas touch? It may be that the street improvements are the easy part. Dealing with success while preserving the foundation it was built on will be the challenge of the future. Other former small towns lay buried somewhere in the sprawl, gobbled up by the smothering suburbs created by loving a place to death.

That there is a risk of this happening in Floyd is certain. But contrary to the county seal, there are many who believe that we do not need not grow in the all-to-common big-box ways of small towns these days to prosper. But finding that balance between what we get and what we give away is necessarily at the center of all the discussions I’ve been involved with.

There is a large measure of caution here, of measuring twice before cutting once. And so far, the balancing act seems to be keeping Floyd on its feet, and only occasionally do you have to sit through more than one light change at the single traffic light in town.