I had really expected that prizes would be awarded from a hundred or more entries in this year’s photography competition for the Floyd County Harvest Festival. Lord knows, there is a large and active photography club here, made up of members in at least two counties, and you can find photographers under every rock, including more than a few professional-level shooters.

So to have such a weak turn-out was disappointing, and it made judging difficult and awkward. In the eight (?) categories each with adult and youth levels, there were only three third place ribbons; in others, there were only one or two entries. If only one, regardless of merit, should the judges give a first place? If the choice was between only two in the category, were they required to award a second prize by default to an image that was not a prize winner in the combined judgment of the three judges, each of whom was a photographer of some experience and knowledge? 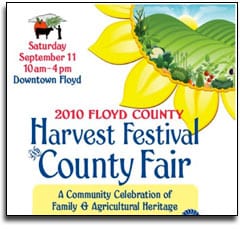 When the prizes had been conferred in this manner, a conversation ensued (ostensibly to be continued over beer, but Dogtown Roadhouse, like the rest of town, was a bee swarm of humanity last Friday night!) about what could be done, should be done to increase the number and quality of next year’s entries. More was said of quality than quantity, having just critiqued quite a few images that, with some simple and basic alterations, would have benefitted so much from an artistic point of view.

So next year, what? More advanced notice to area photographers; a significant best-in-show prize; and/or a short course or other teaching tool to help those who want to improve their images’ composition, lighting, color and contrast to be able to do that without professional tools?

Poor composition was perhaps the chief poverty noted among many of the submitted images. There was no object to draw the eye towards the message of the image; shots taken at mid-day were flat and lacked depth; nice compositions of butterflies (there were LOTS of fritillaries featured in this year’s entries) were marred by blobs of distracting, not quite out-of-focus, busy background light.

I know as a young photographer long ago, I took hundreds if not thousands of “bad pictures” that were cherished images for me because of theÂ  setting and personal experience of being there with camera in hand. Having taken the image, I could see, feel and remember beyond the frame. But the resulting images to anyone but me were unremarkable and not very interesting, leaving the viewer’s eye wandering in search of the story.

I enjoyed the exchange with my fellow judges when there were relative merits that recommended one image over its competition. And I agonized with them when awarding a prize to a point-and-shoot photograph just because it was there on the display rack. We certainly didn’t want to discourage participation from photographers at all levels, and can maybe, with some early organization and effort, work toward a higher awareness of what makes an image speak the thousand words it should and could.

Along these lines, stay tuned very soon for details of a “first annual” photography competition and exhibition in Floyd.

1 thought on “Worth a Thousand Words: Photo Competition”