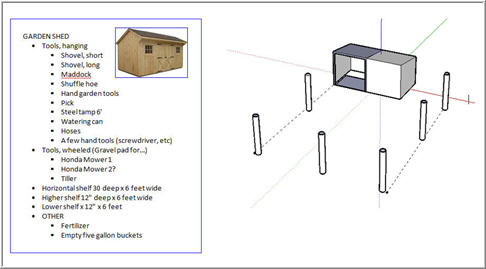 It has been a long and discouraging ordeal–just having a simple vegetable garden in a remote place infested above ground by crows and deer, below by moles and shrews. And this, in a cold shady creek valley where the soil temp lags two weeks behind even average gardens in much of the county. Something has to change, and it isn’t likely to be to concede defeat and never eat a homegrown tomato ever again.

So we began last summer thinking about moving the garden OFF the septic field and closer to the house. In addition to getting more sun, there we could sink 10 foot posts 2 feet in the ground and build our Gulag Garden to replace the Deer Salad Park of the past few years–an ungulate-proof fortress that, while no guarantee of a good garden, at least will spare us from the heart-sickness of seeing early morning cloven hoofprints in the soft loam next to where the beans once almost grew.

It’s a very simple plan, really: the basic rectangle of garden 24′ x 32′ using 16′ cattle panels and a 8′ x 16′ rough pine enclosure, two 8×8 “rooms”–one open to the garden for everyday tools, the other open to outside the garden with a sliding lockable door for tiller, mower, garden cart, et cetera. (Image in the image is just for visual effect to go with my list of tools, it isn’t the shed we’re planning. Way too fancy.)

It will be a minor miracle if we can get this done for this year’s garden, especially given we’re going from sod to garden in a single bound. Be that as it may, we at least have the vision as I’ve begun to sketch away at it in January. I’ll probably say more about it as things move along. Or not.