This was perhaps my most traumatic year of grade school. And my mother corrects me: the Scent of Death was Tabu.Â  On the plus side, it would be the beginning of the decade of coming of age music. But that is another subject for another time.

-Â Â  Â I wrote the teacher’s name just now and hair on my arms stood up. Not a good sign. I should have had counseling during and for years after sixth grade.

-Â Â  Â The Red Book was the bane of my existence. I could not keep up with my homework (it was somewhere in the mess that was my desk) so I fell farther and farther behind, as recorded in the Red Book. I soon came to dread school, but found there was a solution.

-Â Â  Â I spent a total of a month at home that year, after learning you can run an inexplicable low-grade fever by either holding the thermometer under warm water or, if you’re being watched, under the covers you can rub it briskly against the sheets and create enough friction to become sufficiently ill that you can stay home and watch Arthur Godfrey.

-Â Â  Â I was so far indentured to the Red Book but the end of the year that I was required to address my incompletes over the summer AFTER I had been promoted out of Guantanamo. Such a thing most surely is contrary to the Geneva Convention–unless you are Ruth Hill Carr Badeau.

-Â Â  Â My mother had this same teacher when she was Ruth Hill Carr. I think my mother would have been perfectly normal otherwise. Just kidding, mom.

-Â Â  Â Was it Estee Lauder? Shalimar? Whatever it was, the woman bathed in it. By association, the slightest vapor of it gave me prickly heat for years thereafter. 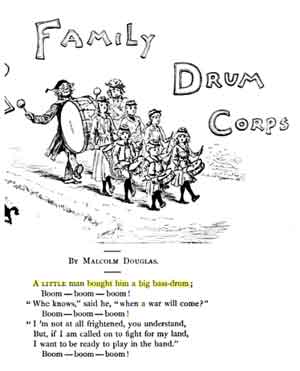 -Â Â  Â This was a year of morning rituals of regimentation to keep the troops in line. One thing for sure, I remember the 121st psalm. “I will look up unto the hills, from whence cometh my strength” and “A little man bought him a big base drum, boom! boom! boom!” We recited together like so many little wind-up toys. Or else! And I learned and still remember the Greek alphabet and the difference between Ionic, Corinthian and Doric columns. The woman was a Roman era groupie. Three years later, I took Latin in high school. I blame (or credit) Mrs. Badeau for that. In combination with Ms Long’s phonics and vocabulary, I was science-jargon primed for college.

-Â Â  Â This was the year some of my buddies discovered the climbing wall. The brick front of the school was such that about every eighteen inches, one row of bricks extended an inch or so beyond the others. If you were careful, you could scale the outer wall a few feet and jump back down. But where’s the fun in that? We decided we’d shoot for the moon: an open second story window, during recess when everybody else was on the playground on the other side. Maybe four of us were about to reach the window when Mr. Hall leaned over, looked down, and just waited. This was one of the first “Oh Crap” moments of my young life. I have had a few since where you’re damned if you climb higher and damned if you let go.

-Â Â  Â This would have been 1960 and the coming of the first new decade of which I took note. I think that was because the even number let me easily predict that at the beginning of the new millennium I would be 52 years old. I could not imagine the point of living so long. I still have moments of uncertainty in that regard. I still am a Lost Boy in NeverNever Land.

â–¶ Percy Faith – Theme From A Summer Place – YouTube
See where this 1960s hit carriesÂ  you.