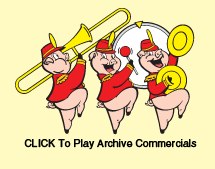 Because it features Skeeters (“a Million dogs sold”) in our former home town of Wytheville, a friend sent along this video below about the “red hotdog corridor” that cuts a swath through southwest Virginia, across the decades, and well into central Alabama where I grew up with the Hooray for Valleydale marching band of pigs singing the praises of their mild-flavored hotdogs.

The Valleydale owner spent a small fortune on his ads (one of the first ads to air when WSLS in Roanoke started in 1952), but those munchkin voices are as clear and fresh to me as if it were yesterday. And I’ll be darned if, even before breakfast, the thought of a couple of pan-blackened dogs on a soft white-bread bun smothered in mustard and chili makes me want to skip the Bran Flakes altogether.

Matter of fact, when I’m away from the Healthy Diet Enforcement Police, I think I’ll snag me a couple of red dogs in Charlottesville. With everything. No, hold the onions; I’m on duty.

By the way, watch the twitter sidebar, where I’m more likely to report from “the field” for a few days than to the blog proper; or follow me at twitter.com/fred1st for all the latest.