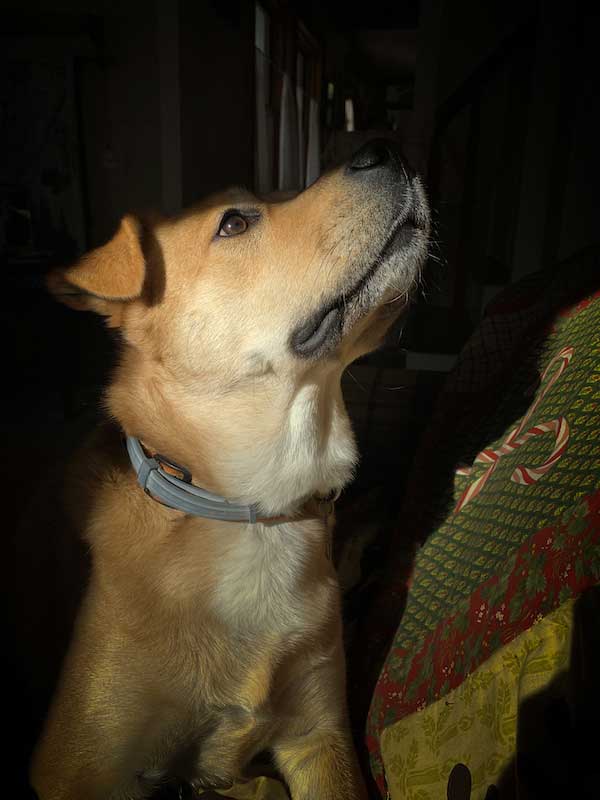 This could get complicated, seeing as how I have not spoken in public places about “the dog situation” in some months. I was forbidden to, so fraught with potential guilt in giving the dog-in-question back to Angels of Assisi should we fail, or otherwise not succeeding in the training to make him fit in, to bond with us and behave anything like the dogs that have been our companions, back to our first in 1981.

I have good news, for those who might have been in on the story: Scout is still with us, and he belongs here and knows it. It has been a steep uphill battle, finally won. Mostly.

The story of that behavior mod remains for another time, perhaps. It is the discovery of Scout’s genetic roots I want to share briefly here this morning.Â

The mug shot on the animal adoption website showed a pale-colored medium-sized 13 month old dog named Coco, and described him as “yellow lab / golden retriever mix.” Three of the four A-team dogs we’ve had under our roof over the last 35 years have been labs, Gandy the Ridgeback-Shepherd mix being the exception.

So we took the risk and brought him home–the first older-than-eight-week puppy in our pets lineup, and odd to think of it: He is likely the last dog we will ever have in our lives. Strange to think the dog is likely to outlive us, but there comes a time.

Regarding pedigree, I was convinced there was other blood involved. Scout (our new name for him) does not have the docile-tractable lab state of mind exactly. He shows a much more independent streak, with less drive to please and cooperate. But maybe that just has to do with his first home, about which we know nothing–only that he came to us knowing nothing. Sit. Stay. Come. Not so much.

But the strangest physical trait was the tail hooked over the back. So I thought maybe husky; or Spitz. But Scout’s tail is fish-hook curved when he is intent on something out the window or in the field, then droops to horizontal when he is calm. What’s up with that?

Scout’s tendencies outdoors are not lab-like. Every lab we’ve ever grown to know has been an ardent and skilled MOLE extractor. I have pictures of Tsuga in the snow, tossing a mole high in the air, and catching it in his mouth. Our yard has always been pockmarked with mole diggings. Not anymore.Â

Scout could care less about moles, but he is a champion mouser. He digs out a big tuft of shredded grass from the pasture a half-dozen times every time we take our walk there. More often than not, there is a protein snack inside.

And lastly in the list of pedigree puzzlers, in the garden (which has become Scout’s alfresco recreation space) he doesn’t help with the moles there like I wish he would. But he digs “snout pits” for no apparent reason. I think I have a picture somewhere of the results.

So here’s where the story takes a turn: Because it was new and I wanted to test it, I used Google Lens to take a picture of Scout, who was sitting there next to me when I had the notion to use this new tool. It came back with an identification of the object in the image.

And that is where the story picks up in the next blog post!Â

BONUS FEATURE (or additional punishment, depending…)

Who originally made this quip:

I thought it was Groucho Marx. Maybe. Maybe not.

4 thoughts on “Outside of a Dog”