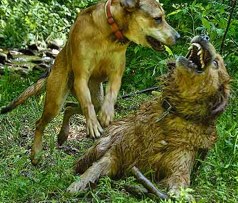 We have new playmates for Gandy coming soon. Ann frets about her behavior when the grand daughters are here briefly. I don’t worry so much about her behavior as her accidental injury to humans because she is just so “involved” in everything we do.

I was high up on an 8 foot step ladder yesterday picking beans from the top of the Garden Fortress. I looked behind me as a prepared to step back down, and there was the dog’s head sticking out between the rungs, as she got ready to come up and join me.

She is relentless in play with other dogs–like the #120 golden retriever Jessie AND #60 black lab Roxie that my neighbor brought down a few days ago for a play date on Nameless Creek. After a long romp in and around the water, the larger dogs lay in the shade on the sandy ground, panting, while Gandy bounded back and forth overtop of them, taunting them to get back up and play.

She does something similar to me when I am sitting at my desk working on the keyboard. She loathes being ignored. No amount of scolding or shouting or lunging at her will dissuade her. And turning my full attentionÂ to herÂ while sitting in my chair Â only buys a half a minute of pause from her barking and yipping commences: COME PLAY!

So I sit long-legged on the floor, and we wrestle. She is really doing well not actively biting but only mouthing, but her teeth and claws are not Nerf look-alikes, and we bump too hard from time to time. Or worse.

This morning, actually while I was working on something for the blog besides this pitiful tale, we were playing like two pups, and one of her dew claws raked a gash in my left forearm. I didn’t think anything about it, but a few minutes later, it was bleeding more than most superficial scratches.

I went to the bathroom and washed it in cold water, and there was a gaping wound, not full thickness but down into the upper dermis, pulled apart like the cloth between buttons of a fat man’s shirt. It could use a stitch, though cosmetic concerns ended a long long time ago. I’m more worried about the nasty bugs out there that might want to live in my healing skin.

I had to find some gauze pads and wraps that will stay on my hairy arm long enough for the wound to heal over. Try doing this alone with one hand.

Had this injury been to one of the grand daughters, that would be a pretty big deal. And yeah, I know: I need to buy a set of dog toenail clippers and protect my hide from any more manly scars.

The Black Knight is invincible! I’ve had worse. It’s only a flesh wound! Come on then!

5 thoughts on “It’s Only a Flesh Wound”