Now Who Gets My Last Corn Flake?

There goes the daily squirrel, passing under the window beyond my desk. He was always at such risk, and knew it: tentative, uncertain, hesitant. Gandy was always watching.

But this morning, as if he knew he no longer had to fear the eyes tracking him from the house, he is casual. He stops on the walkway below the bell post to preen; twitches his tail defiantly; and without fear, covers the distance to the walnut tree for another meal. He will grow older and fatter, after all.

And I have to wonder if the word has spread among the moles–at even greatest risk of discovery that the squirrels–in that uncanny way G-dog always employed to determine where and when to dig.

It had something to do with the ears, but not entirely. A cock of the head, the weight shift onto the trembling hind quarters, and then the pounce. How did she know, running at full clip; sudden change of direction, then another thirty yards, and prepare to pounce and spike the landing on front paws alone.

I will miss that. The moles will not. I will miss–am missing so many very small details of interaction now missing. Ann and I have both remarked the countless subtle ways we accommodated the dog’s movements, her needs, her noises, her habits. Her be-ing not different from our be-ing.

And so, as with other just-past pawed friends, I will discipline myself to remember before I forget all those subtleties. I have a list of prompts, with others surely to come, that I can flesh out–sometimes in paragraphs, other times in single words or phrases that only Ann and I would understand. 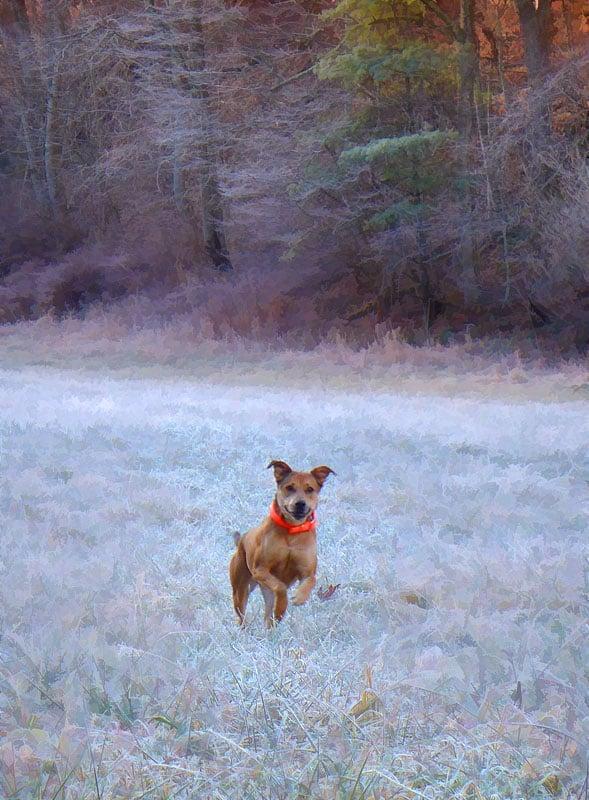 Time heals all wounds. And I don’t know quite how I feel about the balm of forgetting. I want to forget the loss but remember the lost.

4 Comments on “Now Who Gets My Last Corn Flake?”