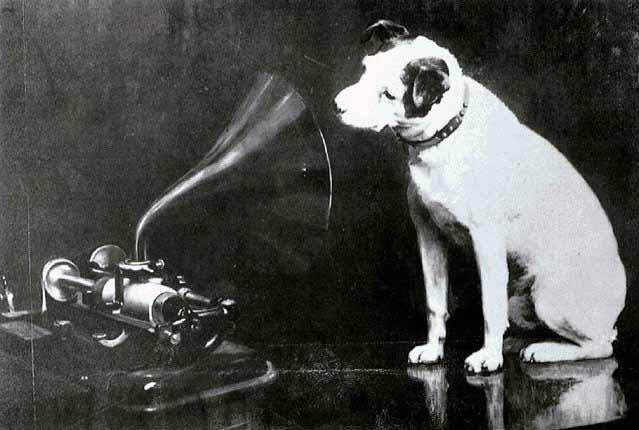 If you’re of a certain age, you’ll remember this image associated with “RCA Victor”. The faithful dog cocks his head in recognition of his master’s voice, such true audio fidelity that Fido thinks the leader of his small pack is inside the fluted speaker of the record player.

You get the sense from this image that, for this dog, the experience of hearing a familiar voice is not unpleasant. He’s obviously attentive, drawn in close , curious.

Well not so our dog. It happens every time he hears my voice coming from the radio (back before WVTF ended its long history of airing contributor essays) or just now, as I was downloading the recorded voice messages to myself off my Olympus DS2 digital recorder.

As soon as I turn up the volume to hear what I said, the dog starts bounding up on his hind legs at the back door, frantic to get as far as he can from his master’s voice. Anybody else have such puppy paranoia to tell of? What do you suppose weirds him out about this?

Back some months ago when I reported a similar canine behavior when high-pitched chat message alarms went off, I thought maybe it was frequency. Maybe it hurt his ears. Now I know I don’t have the most soothing voice in the world, but surely it isn’t physical pain he’s avoiding. What goes on in a dog’s mind–you gotta wonder.

3 thoughts on “Please: NOT His Master’s Voice!”