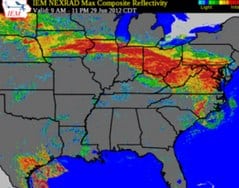 Had you ever in your life heard this meteorological term before June 29, 2012? Not me, and I consider myself a bit of a weather-watcher now for years.

Want to bet that derecho is here to stay? I would put money on it.

It was first used to describe a storm back in the 1870s, according to wikipedia. It comes from the Spanish word for direct, because unlike the spinning winds of a tornado, a derecho (duh RAY ko) has straight-line winds that can rival a hurricane. At the front edge of such a consolidated storm system there might be downbursts, as seems to have happened with our recent derecho.

The June 2012 derecho got its very own wikipedia page. Right now, its a modern-day record breaker. But have you noticed, by chance, how many weather and climate records are being broken lately?

Derecho winds gain strength from cells of extremely hot air. I’d be willing to bet that we might even hear again this summer of widespread hurricane-force squall lines related to excessive and prolonged hot weather. We’re only in the third week of summer, after all.

Here’s what the storm looked like not long before it hit Floyd County Â the evening of June 29. I’d never seen anything quite like it. Down in our valley, it passed over us, so that I was shocked to see the impact on the rest of the area the next day.