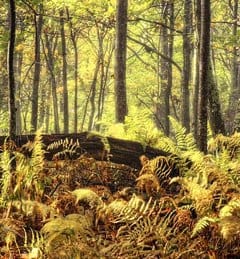 …Water in living tissue freezes, and juices don’t flow from root to shoot. Freezing kills exposed cells, water expanding as it cools below 39 degrees. Metabolism slows to a halt when the mercury falls since enzymes and other catalysts refuse to work fast enough below a certain fixed temperature. The whole living world might die of exposure. Autumn forebodes a serious change of plans.

Leave town, the birds say: go to the beach! And they gather early and debate loudly their intentions, starting in September. Drain the radiator, cry the broadleaved trees, and abort the solar panels; they won’t do much good when days are short.

Dig! Bury yourself in the mud, under bark, deep in the cleft of an overhanging rock, in the hollow of a canker in a big walnut in the shelter of the valley.

Find food now, say the rodents–oily nuts, fat-rich seeds, calorie-dense stuff that won’t spoil. Hoard it, starting when the green fades, and forget picnics on the lawn until the last white has melted away. Go into a chilled slumber in a safe place, and stir only after the soil warms and the creeks thaw. Winter is coming! Make ready!…