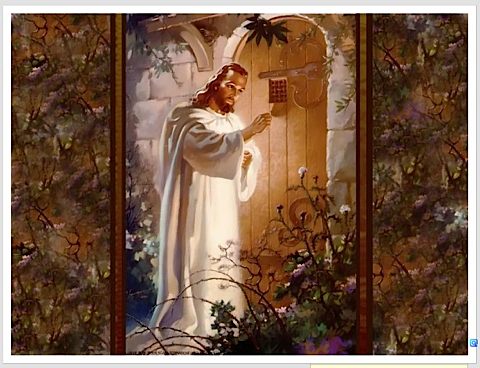 Between our pew and the pulpit, two white ceiling fans above the center aisle stirred the tepid June air. Beyond the walls the hymnal voices of a few dozen churchgoers were audible only to God and the few head of cattle grazing nearby in green pastures beyond the stained glass of Huffville Church. My gaze drifted past the minister’s voice to the picture on the wall behind him.

Surely it had been there in that little country church for decades: how could I have not seen it for the six months we’ve been going there most Sundays? It was so very familiar–a visual clichÃ©–that I must have seen it, but didn’t become aware of it until today.

The very same picture hung in a remarkably similar church we once were part of–more a part perhaps than any other church we’ve attended. In the tiny sanctuary of Berea Christian Church, our adjoining neighbor to our little farm in Wythe County. This same picture of a smooth-browed Jesus in radiant robes hung behind that pulpit as well.

His dark brown hair flowed over his shoulder while he knocked at the door–a substantial wooden door lacking an outside latch (only the one inside can open it), overgrown with thorny, unpruned roses. And if anyone will answer…

I remembered this same familiar face, robes and kind demeanor going back more than a half-century. I always wondered, when my mother told me there were no photographs from Christ’s day, how somebody could just make up the face of God. Did he really look like that? Until yesterday, I knew nothing about this oh-so-common icon of the faith. 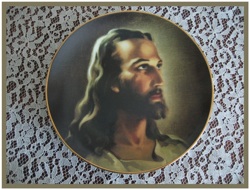 It is an image that for millions has become the face of the historical Jesus. Frankly, I always questioned even as a child, what with his walking through treeless and dusty terrain and sleeping on the ground, if He was not likely so clean as this picture.

(Theologically speaking, though, this depiction would be the risen Christ in his perfected body, yes?) And didn’t most of the men over in that part of the world have black hair, not brown? Would that make OUR Christ too unCaucasian for Western tastes?

Yet, it is this artist’s vision that paints the picture of the Son of God in our heads and hearts–the work of a certain Warner E. Sallman. He created a charcoal sketch in 1924 he called “the Son of Man” and from that created a color painting, The Head of Christ, in 1940. It was a kinder, gentler Jesus than the more austere countenance’s imagined by his Victorian predecessors, “accessible and reassuring” in a very troubled time. And that face has become an industry of sorts.

This Head of a European-looking sepia-toned Christ has not been without its detractors, seen by some as too effeminate, and once displayed next to a shampoo advertisement comparing the holy coif with that of the famous Breck girl’s.

But in the end, American Protestants have made Sallman’s Jesus our own, with more than half a billion reproductions to date. Has the Good Shepherd thus been marketed and commodified? Perhaps. But we must imagine some countenance when holding any person in our minds.

And it seems likely that no single face of God has been held in common by so many believers in my lifetime–believers who, when they have a friend in Jesus, walk and talk with this one bronzed and bearded face I saw again today behind the pulpit once again, for the first time.

See at Amazon: Icons of American Protestantism: The Art of Warner Sallman

5 thoughts on “The Face of The Real Jesus”