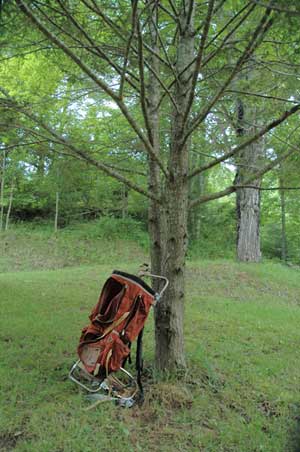 This is the second part of a four part run in which father (me) and son (Nathan, author of Parts 2 and 3) describe our variant perspectives of his long back-roads walk home in 2000–from Bar Harbor, Maine to Goose Creek in Floyd County, Virginia. Part one is here. This time, Nate tells his side of this little hike.

In his last installment of “A Road Less Traveled,” my dad reflected back on the origins of some of his more treasured gray hairs. In particular, he was thinking of a dumb stunt I pulled—a road that I traveled—eight years ago when I’d just turned 21.

I had recently developed an obsession with all things Northern. North for me, was no mere cardinal direction. It was, instead, a fabled place where adventure thrived. Somewhere up north, and soon, I’d move into some blustery hut and write bad poetry and eat snow till spring. Then, plump on whale-blubber and weeks of cheap wine, my real adventure would begin. I would wander to the roadside, put out my thumb, and like a poem scrawled on the back of a napkin, I’d blow away.

With Mom and Dad waving handkerchiefs behind me in Floyd that January of 2000, I drove a thousand miles northbound to Bar Harbor, Maine. For the next three blizzard-ridden months, I holed up in an attic and did a lot of the safe, sane things I promised Mom and Dad I would do. I brushed my teeth; I slept indoors (and sometimes in my car). I worked at a deli a couple doors down. And on the wilder fringes of things, I hiked Mount Desert Island for hours a day. And back in my room, I wrote hundreds of pages of excited babble that all boiled down to three words: Youth! Life! Possibility!

Dad seems to think that all along I was secretly scheming to walk back home to Floyd. But here he gives me too much credit. In fact, at that point, the idea had never yet crossed my mind. What I conceived early on was less a “plan” than a recipe: no money, no agenda, just an open road and a willingness for … well, whatever.

But on April Fool’s Day (fittingly enough) I put all these other ideas on hold. Late that night, wandering alone on a pitch-black road a few miles outside of of Bar Harbor, I stopped with exhaustion and laid down, looking up at a frigid, starry sky. And there, feeling my body heat leech into the asphalt, I knew that my plans had changed. I would have no more visions of hitched rides and freight trains: these only made the roadsides a blur. I wanted to see everything — the good, bad and sprawl alike — and that meant moving slowly, taking it in with every step. I had driven from Virginia to Maine in two days, and since had forgotten nearly all of it. I knew I wouldn’t forget a walk back home.

Ten days later, I hefted my dad’s creaky old Jansport on my back and headed out of Bar Harbor. I could still hear Mom’s voice ringing in my ears—recounting on the phone, the day before, how much she’d cried, how little she and Dad had slept in the last week, how sure they both were that I’d “learn the hard way” the fallen state and dangers of a modern world.

That night of the first day on the road, with some twenty miles now behind me, I was hiking yet again on a pitch-black road. The occasional headlights of logging trucks flashed through sleet and freezing rain. Each time a truck roared past, I stumbled to the roadside, often into puddles, my eyes forced down by the light’s blinding glare in the blackness.

This time, I had no attic to return to, and a warm bed in Virginia was still some thousand miles away. What on earth had I done? At one point, a passing pair of headlights silhouetted a roadside picnic table just ahead. Ready for any relief, I fished out my flashlight and hurried to the table. “No Camping” read the sign nearby.

At this point, I didn’t care. Gathering a small heap of fallen branches, I put a small pile between myself and the road, and covered my pack with the rest. Under the table, I climbed clumsily into my sleeping bag, and prayed for sleep.

For the next two weeks, as I walked my first two hundred miles toward New Hampshire, many of Mom and Dad’s lesser fears were realized. The temperature seldom rose above 35 degrees, and ten days of rain sought to kill me before I ever left Maine. There was also plenty of the foretold bad traffic, sprawl, and even some butt-nipping dogs, sure enough.

But what none of us expected—myself included—was the outpouring of kindness from the roadsides. In the first twelve days on the road, nine different strangers took me in. And suddenly I realized that my long walk home would be far less about the days walking and more about the late evenings talking with monks, cowgirls, and dying old tycoons.