Time was, I spent much of my winter with a chain saw, searching out downed and dead trees, windfall along the road, and more recently, what I call “sissy wood” along the creek: witch hazel and spicebush that’s easy to left and won’t kill an idiot if it falls on him. I told my “Darwin Award” story about almost getting smashed a few years back by a falling tree that zigged when and where I zigged.

With the snow-bound winters we’ve had here lately, wood cutting from December through March would be difficult, cutting on icy slopes and hauling it across the frozen creek. We’d have had a very hard time bringing in four cords of home-grown wood to keep us warm. 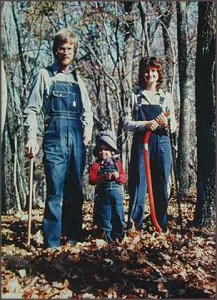 So I gave in three years ago and, for the first time in my wood-burner’s life that started back in 1975, I bought a load of firewood from a fella over in Bland County–more than an hour’s drive away. Got another load from him last year, and enjoyed talking to the rough-hewn fella, who has done nothing but cut and haul firewood for thirty years.

But the cost was going up for this a 3+ cord dump truck full as gas prices go up, and I understood that. But last year’s load was disappointing– lumber mill culls, odd-shaped and grainy chunks from trees that looked like they’d been submerged under mud–maybe from a construction site where entire trees were simply dozed out of the way. This year’s hearth has been the dirtiest ever because of that.

Then a month ago, right up where Goose Creek meets the civilized world, I passed the same size dump truck heaped over with locally-cut wood for sale, two miles from home, and offered by neighbors I knew: the hard-working fellas with the backhoe that have helped us with projects (like clearing the field of neglected 15 foot Christmas trees) since 1999. I called, they delivered.

They brought us a load two weeks ago, and dumped it down beside the garden. I’m working today on my seventh Dodge Dakota load to get it stacked behind the house. And it is a pleasure to work with: all oak (mostly white) and hickory, straight grained, cut exactly to the length I requested.

It makes a nice looking wall out back, don’t you think, both pleasing and pragmatic in its art, a visible investment in our future, a conversion of cash to real goods far more practical and satisfying than most.

5 thoughts on “Wood If I Only Could”