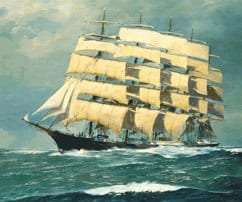 Assured in advance by the region’s soggy-foggy reputation that I would face constant drizzling rain there, I bought the first modern rain-proof garment I’ve ever owned before my May trip to the Olympic Peninsula of Washington.

But following the thread of waterproof garments as I comparison shopped for that red Goretex parka I finally purchased,Â I considered what a fine thing it is that nature has succeeded in keeping land vertebrates both warm and dry.

The challenge is to keep the body inside from losing heat and from retaining water vapor given off by the animal’s metabolism. For mammals and birds, wet means heavy. Heavy means slow, and slow means you’re somebody’s lunch. Wet near the skin also means evaporative cooling, and too much of that can also be the end of a creature that experiences the shutting-down of hypothermia due to heat loss.

Nature wins first prize here with a wonderful invention called skin, a porous, heat-retaining, moisture-releasing surface, oiled by tiny glands and covered, more or less, with water-shedding hairs or feathers that also trap warm air next to the body.

Next to skin, so to speak, Goretex (patented in 1976) comes a distant second, but it has solved the problem I learned about the hard way long ago. In my ignorance, I wore a rubber-coated Army-Navy raincoat on my first backpacking trip to the Smokies. It repelled 100% of the rain and retained the same percent of the moisture created by my uphill exertion. Somewhere not far from the Clingman’s Dome parking lot, the cheap raincoat quickly became a pedestrian sauna.

Breathable and waterproof Goretex solved that issue with its design that lets the body’s moisture as molecules of vapor escape but prevents much larger drops of moisture from coming in. We should not take this modern “miracle” fabric for granted.

Bare human bodies in their native state are as well equipped to retain heat as a plucked chicken. We are laughably lacking in wool, feathers or fur. Conveniently our meat–buffalo or bearcat, cow, sheep or wooly mammoth–has come wrapped in warm, water-shedding coverings we lacked.

Then came mankind’s period of exploration. When our ancient ancestors reached the coasts, they built boats to get to the other side. On the boats, the early mariners in wet-heavy bearskin coats were worthless climbing the riggings in a winter storm and possessed all the buoyancy of a cinder block when washed overboard. On to Plan B.

At sea, a serious waterproofing issue beyond the soggy sailors was the sails. The linen sailcloth became heavy when wet, which played havoc with both speed and balance. Slathering sails with fish oil helped, but a thousand cats met your ship at the dock. Eventually, cotton replaced linen, and wax replaced oils.

But the waxed cotton became stiff as a piece of plywood when cold. So much for the billowed sails. And the sails turned yellow as a pirate’s smile over time. Sailors cut those discarded scraps of cloth, first into capes, then into slickers as a better alternative to bear skins. The yellow of your hooded first-grade raincoat carried the color of those ancient sails into modern times.

And in our day, the perflurochemistry (PFC) industry has ushered in all sorts of rain, grease, stain and dirt-shedding, no-stick chemicals. The basis for this class of compounds is fluorocarbons–carbon chains that hold fluorine at bonds where hydrocarbons like propane hold hydrogen. Goretex, Scotchguard and Teflon are PFCs.

The teflon-like compounds are not natural in nature. They are stable and long-lived, and PFCs are now found on every continent in almost all humans and animals. High levels of PFCs have been linked to impulsivity and attention issues in children. The full health effects are still unknown.

And closer to home, beware the toxic fumes from an overheated teflon pan (or a Goretex raincoat on fire?) The vapors produce “polymer fume fever” in humans, and an over-hot teflon frying pan can kill your PFC-sensitive pet bird instantly.

The price for my Goretex jacket was right dear. But more than that, the miracle fabric’s final cradle-to-grave COST (from production to disposal) will make me think twice about any future rainwear purchases. Next time, I may go with wooly mammoth.

And I should mention, the week I gave my new red raincoat a road trip to the Pacific Northwest, it came back dry. It never rained a single drop.

This tale appeared in the Floyd Press and Roanoke Star-Sentinel in the fall of 2011.

2 thoughts on “Dry and Warm: No Easy Matter for Plucked Chickens”