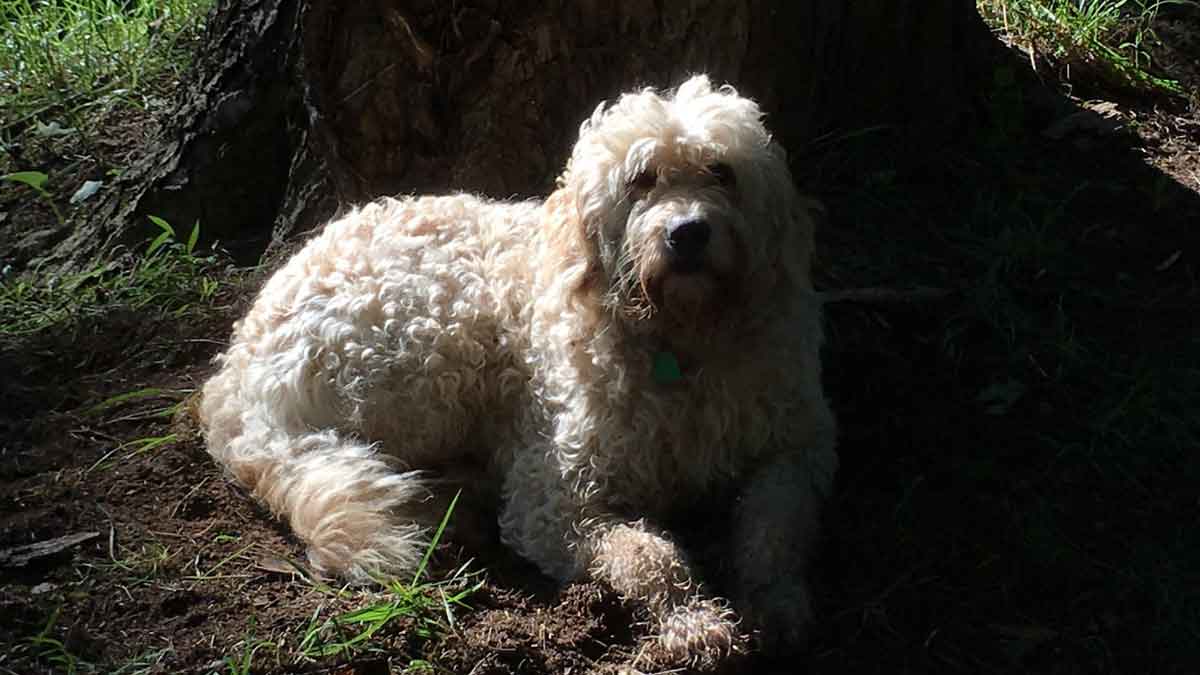 Go to medium.com to see more images for this post.

We did not even know her name in 2014 when we first insisted that the white dog go back down the road to the new neighbor’s house where she belonged. Surely her family doesn’t want her wandering too far from home, we reasoned, what with their small boys who would miss the dog if she was gone for long.

I lobbed bits of gravel from the road in her direction in mock threat. “Go home!” I’d tell her, and she’d slink back east, a few tenths of a mile, to where we knew she belonged. We thought this was the right thing to do, especially as the times she did get close enough to the house, our dog, Gandy, would set upon the would-be visitor with bristling bluster and harmless aggression, not willing to share either territory or affections with an interloper.

We went so far as to call her owners once, early on, to let them know where their dog was, lest they worry, like we would worry if she was our dog, gone. They did come to pick her up that time, and we learned her name was Feather. She was also a rescue dog like Gandy; she was the same age and almost the same weight as our dog. But the two dogs did not have a speaking relationship. Yet.

Later that year, we’d see her (you could not miss the long-haired almost-white Labradoodle at the shadows at the edge of the pasture) just watching from a distance as we made our routine walk-abouts down the New Road and back to the house. Gradually, she’d leave the cover of the woods and slink sheepishly towards us near the end of our walk, her approach greeted by Gandy’s challenge and some mild rough-housing. I’d pick up a rock (or maybe throw a pretend rock her way) and say “go home” and she would go.

But after a few months of insistence, Feather and Gandy came to an agreement. By that time, we’d realized Feather’s whereabouts might be lost in the list of concerns of the young couple with full-time jobs and two small children. And Feather had figured out the retired folks with that other dog in the neighborhood who were all outside every day made for a pretty nice day camp. And so we saw her often. Then we saw her every day. And many nights. We did not own her, but she seemed to have decided that she owned us.

And yet, early in that growing relationship and before Feather finally realized which side her bread was buttered on, she was bad to set off on an adventure to find human (and maybe other four-legged) companionship. Feather, it turned out, was the most needy dog ever to be in the company of humans and driven to be touched by hands. And so when nobody was home down the road, she took a road trip.

Her time and distance record were four days and five miles from home. We were frantic during her uncertain absence. It ended well. Another time we saw her picture on Facebook when she had been taken in by some folks we knew about four miles up the mountain, rescued from a bad outcome on a very busy road. We fetched her home in the car.

In those early days, she followed many a bicycle rider out of the valley, certain they had come to sit with and adore her in the cool shade. They didn’t sit, so she just kept running behind them. When this happened on our watch, we jumped in the car and caught up with her, and brought her “home.”

Finally, after some months of routine day camp here, she understood that her needs for adoration could be more than met just up the road from where she technically belonged; plus she really relished the romps, the boxwood chase and the roughhousing with Gandyâ€Š–â€Ševentually to the point that they turned what used to be the yard into a muddy wrestling ring. We lowered our standards of yard care and increased our tolerance for mulch on the hardwood floors, and life was good.

She was a creature of habit, governed by regularity and predictability. We new for certain that it would not be long on any given dawn before her ghostly white form would appear, ambling in no particular hurry, up the road, then up the driveway, and at last to the porch. If we failed to see her arrive we’d be startled (but not surprised) to find her standing with her nose pressed against the back door when we opened it for firewood. She’d enter, greet all, and go to her Feather bedâ€Š–â€Šnot far from but not in the same room as Gandy’s cushier loveseat in front of the woodstove.

Predictably, should we be away from the house for a few hours, upon our return, Feather would appear out from under the lilac bush to greet us, always searching with some urgency to find a stick or a piece of gravel or a leaf. In her world it was bad manners to have nothing to offer in exchange for a two-handed head snuzzle. She might even get a brushing if the offering was carefully selected and convincingly presented.

And just as predictably, at the end of the day (on those days when she was required back down the road) the one of us that drew the short straw got the distasteful task of coaxing her out the back door, telling her how happy we were to have shared the day with her, and finally the tough love command: “Feather, go home.”

We never figured out how she learned to obey this directive, but she always did, even though she visible wilted when she heard it. Down the walkway, round the front of the house between the Forsythias and to the road she’d go. One of usâ€Š–â€Šusually Annâ€Š–â€Šwould watch from upstairs to be sure she didn’t double back and hide until dark and show up again just at bedtime. The next morning, she’d punch the clock and another day of romping, wrestling and serious napping would begin.

In my private recollections and journal but not here, I will enumerate a long list of very particular behaviors and attitudes and already-fading memories of Featherâ€Š–â€Ša character in my life that I never want to forget. It is both a kindness and a tragedy that the wounds of such a loss do become less painful with time, but words can give the faint solace of a kind of immortality.

We never took her for granted, nor do we the days we have left with Gandyâ€Š–â€Šwho has not yet given up on the notion that a white form will appear out of the morning gloom. I don’t think she’ll ever quit watching and hoping. Those two dogs were quite a team. We make a point now not to say F’s name out loud so Gandy will hear it and rush to the window expectantly, with her tail wagging.

The blessing was that the decline in Feather’s regular, predictable habits was a quick and painless goodbye. We’d noticed for some time that she was losing weight, but it made no apparent difference to her ability to reach the top of any ridge with amazing speed and endurance, even during her last week. But when she could not keep food on her stomach, she visibly faded. The vet diagnosed her condition as kidney failure. Monday January 23rd was her last day. And Feather went home.