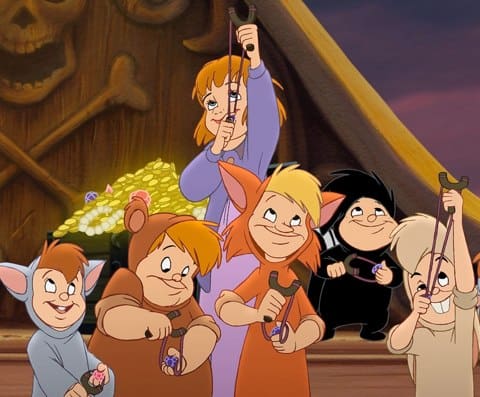 Here, a second excerpt from Aging Through the Lens of Time from my second book, What We Hold In Our Hands: a Slow Road Reader. I am thinking and writing elsewhere about the role that photography has played in my own notion of place as part of a larger “personal ecology.” Image: Peter Pan’s band of “Lost Boys” who vowed live forever-childhoods in NeverNeverLand.

[su_quote]Ten larger fingers later in 1970–it came so quickly after all– I was married and in graduate school. That year my first camera forever changed how I saw and knew time.

Film became a way to preserve present moments in a clear resin of recall.Every photograph set a benchmark in time, held a unique instant in the emulsion of memory, captured in perfect synchrony that vertical line of precise moment that intersects the coordinates of particular place.

No two photographic markers were the same, and there was no going back. With my lens, I fished from the moving stream of time as days flowed through the faces I knew, past the places I loved, leaving the lived, the known moments bobbing on its glassy surface–deeper down, farther back, receding Doppler-like across a realm that I could photograph, could know just once, just now.

I have spent decades more behind the camera, no longer wishing I were older, happy for the past, but savoring photographic instants in the present when one face or one flower, one sunset, yet another family pet or one more grandchild’s candle-covered birthday cake fills the viewfinder and moves on downstream.

And when the year 2000 came, lo I was still alive–much to the amazement of the freckled twelve-year-old self I can with such clarity see in the amber of memory, long ago on a New Year’s Eve.

My twenty-first century face appeared for real in the mirror that millennial year, no puckering required, pleated by laugh lines and crow’s feet, full of wonder, creased like my old first baseman’s glove.

It was the face of a Lost Boy, riding time like a pair of skates, surfing its glassy surface to the vanishing point, standing still yet moving moment by precious moment through time, aging, after all.[/su_quote]