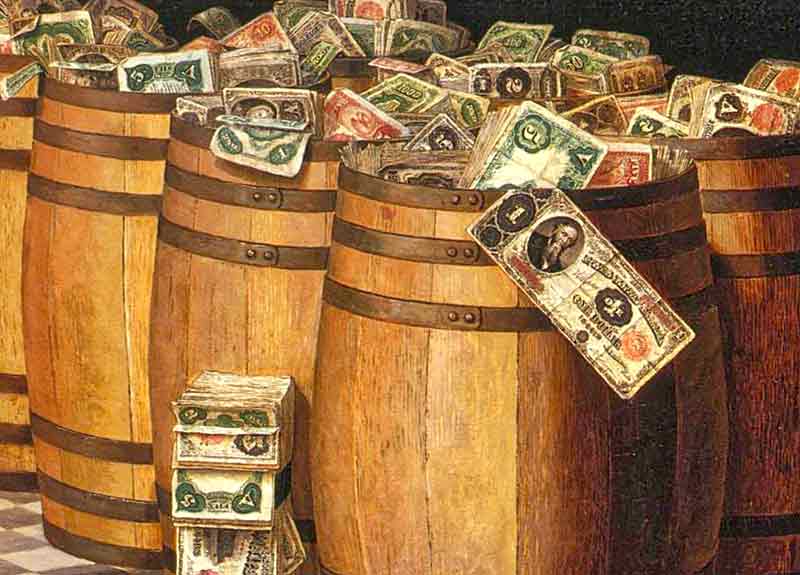 Not surprisingly, I came to discover that there is no one by that name with a PO box in that small Blue Ridge mountain town whose name and zipcode appeared on the envelope.

The namesake of the purported sender was never seen again, nor the cool million he left the plane with, though some reports say some of it was found in an eroded riverbank decades later.

So the crisp, uncirculated 20s in the envelope might have been part of that loot, I thought, as I read the two sides of the interior of the card last week.

No mention was made of books or note cards to purchase–just 10 bills tucked in, with the final explanation that he and his wife also had disagreements about the thermostat–as in Solomon’s Sheets in Slow Road Home:

“Go buy yourself some new sheets.”

So thank you very much, Mr. Cooper, I am not surprised that, with your suitcase full of money you could go anywhere in the world, but you ended up just there, in that peaceful, rural mountain hideout.

That you are a supporter of starving artists I think speaks well for your sensibilities, in spite of your law-breaking, authority-flaunting past.

And let me just offer, lest I am tempted to resort to Google Ads, that anyone else who wants to sustain a wordsmith by underwriting the yearly subscriptionÂ  for sundry app services and software purchases towards book #3, crisp bills are accepted. Also paypal transfers to my regular email you probably already have. Heck, I’m a new believer in the Good Fairy!

PS: the bills, crisp and never-before-used, were issued in 2009, and so NOT a part of the missing fortune from the 1970s that parachuted into obscurity.

PSS: I truly am awed and speechless by your gift, Mr. Cooper, and will be accountable to use it wisely towards whatever words I left to share that are worth the paper they are printed on. No promises, but I might just have enough brain cells left to get the job done. And those old hybrid sheets have, just now matter of fact, come apart at the seams.

1 thought on “Urban Legend Anonymous Patron of the Arts”