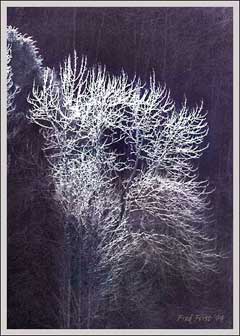 â–¶ Well that should do it to most anything still green: it’s 21Â° this morning, and the world is encrusted in the pre-dawn stillness with a heavy jewel-coating of ice crystals. I’m expecting, when the sun comes up, to find every twig and branch frosted white glistening beautiful, and the Swiss chard dead.

â–¶ Today, I get 15 stitches yanked out of my neck, which, after the pain subsides and it finally stops itching, will be a great relief. A week from today, the cast comes off my right arm. There is life on the other side of fiberglass. To be able to type again, to abandon dictation as an approximate form of communication, will be liberating to say the least, tho it will be some time before I am able to master buttons, handwriting, and other fine motor skills that require full use of my right thumb.

â–¶ Standing on the front porch with my coffee this morning just as a sky begins to brighten, I look up at our ridge that joins the neighbor’s, the one who did all the logging back in the summer. The ridge line is sparse, broken mangy-looking, now that the leaves are gone and we can better see the places where there were once the black silhouettes of many trees against the early cobalt sky and now there are few.

â–¶ Debriefing from last night’s presentation to the Native Plant Society: some wins, some losses. Some of what I wanted to say I said well enough. Some of what I said reached receptive ears. Then there were the other parts — rambling, inarticulate, disjointed but impassioned. But overall, I think people came away with the soul of what I wanted to share. They at least appreciated my good intentions, and several worthwhile connections were made towards future projects and associations.

â–¶ Since I been giving the matter a good bit of thought over the last couple of weeks, today would be a really good time to work on the part of the book that deals with the issue of our relationship to nature. But I think I will wait another week, until my thumb is reunited with its brethren and brain and my butt in this chair, writing the way I’m used to, lo these many years. Just now, I had to turn off dictation, because the dog is barking furiously at hounds at some distance that someone has seen fit to turn loose upon us in the dark.

â–¶ Â Good news on the pest extermination front: a local pest management company rep came Monday and did an inspection of our attic. Â Even though we would swear we heard groundhogs with combat boots tromping around up there, heÂ found nothing but the usual rodent population one would expect in the middle of the forest in an older home at the beginning of cold weather.

Of the options they offered, I think doing what I have always done will be my choice. It will involve D-con sealed in sandwich bags tossed in every direction through the attic access upstairs, as well as under the house. I will set a recurring reminder to do this every two months, more or less, as the bait is consumed.

Their plan was wildlife biowarfare: Â setting up bait stations around the house to lure and kill all the rodents from a wide perimeter before they could get in. No thanks.