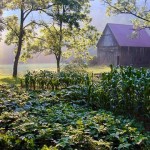 â–¶ We have had a blessed (or cursed, depending on point of view) event here: we have four young hens obtained from our neighbors now living with us in the posh accommodations provided for their predecessors. It will be a couple of months before they begin earning their keep with those golden eggs they eventually will deposit among their other leavings in the coop. Okay, black snakes, hawks, owls, foxes, coyotes, and feral dogs: dinner is served.

â–¶ The logging continues into its fourth month now, and my peace is most definitely disturbed. And they’ve not even begun to ravage the land-owner’s land that borders ours on THIS side of the road. Note I intentionally avoided using the word neighbor, as that relationship has failed to emerge, and I am sorry to say I no longer expect it.

â–¶ We have been enjoying wild edibles lately, including purslane, lamb’s quarters and oxalis gleanings from garden weeds. Also, if you haven’t done so, you should sample day lily buds–especially the feral yellow and orange ones. They are tender and delicious raw; I’m going to butter and salt some tonight like you would asparagus.

â–¶ After a wetter-than-normal early spring, late spring has been dry for us, while other nearby parts of the county have had an abundance. So yesterday, I hooked up a new lawn-and-garden battery to my little pump, and began pulling water from the creek, across the road to the garden and storage containers. It’s still some work, but it’s far easier than hauling 5-gallon buckets.

â–¶ My mom’s six-month-old iPad screen just went green where it should be white. Anybody run across this issue before? Still under one year warranty, but a replacement will require she (read her son) reinstall about 30 apps. She’s been very pleased with the iPad, and if others think their 80-plus parent can’t operate one, you might want to think again.