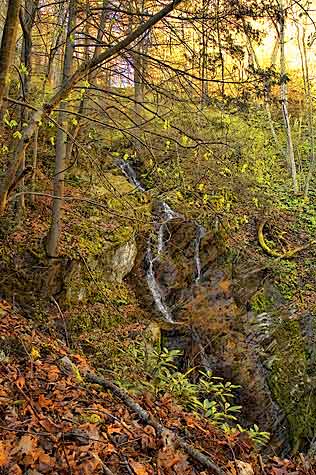 Own a Waterfall: As much as I hate to see it happen, given all the unsettling activity and change and traffic and noise that has come to Goose Creek with the old house burning down and new neighbors logging down to dirt, more change is afoot.

The 40 acres adjacent to us on the west side is for sale. Again. We’d love to have responsible, quiet and engaged neighbors who respect the land, even if they build. There are frankly not any great home sites—maybe one, if AEP would re-route their power lines. But it has a killer waterfall (click image to enlarge) of the rounded, gentle variety. Call Blue Ridge Land, 540-745-2005. And join us in the far-flung, sparse but friendly neighborhood.

Found Fungus: in the “deep biosphere” where we have only just begun to explore and be amazed. This fungus is thought to be 2.7 million years old, and alive, along with dormant diatoms. There is sure to be more to come in this story. Big Pharma can’t sleep nights for the visions of wonder drug sugar plums.

Carpenter Bees are Good? “A huge collaboration of bee researchers, from more than a dozen countries, looked at how pollination happens in dozens of different crops, including strawberries, coffee, buckwheat, cherries and watermelons. As they report in the journal Science, even when beekeepers installed plenty of hives in a field, yields usually got a boost when wild, native insects, such as bumblebees or carpenter bees, also showed up.”

Does this mean I shouldn’t practice my racquetball backhand on hovering wood-bees off the front porch anymore?

alt.floyd — Internet as a Baby: The changes have happened with whiplash speed. This 6 o’clock news segment from 1992 (I think) speaks with a mix of awe and skepticism about this new Internet thing. Love the modem squelch and the memories of bulletin boards as the leading edge of community: visually dead, but described as far more civil than today’s digital anarchy and venom.