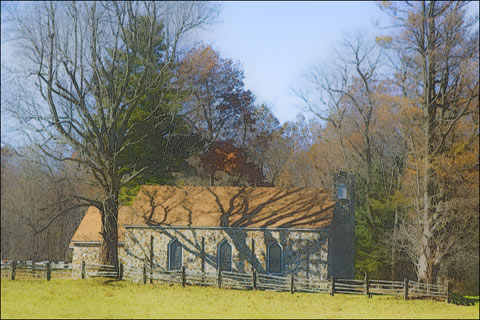 Rock Church: this image has nothing whatsoever to do with the paragraphs below. I just happened across it and it brought back a nice memory of an October day I spent in Mt. Airy visiting with a friend a year ago. And it’s Friday and I wanted to post an image. SO there.

Cradle to Grave Retailers: that is what the big-box-store of the future will need to be. This will eventually extend to almost everything, perhaps large appliances being among the first to come back to the store where they were purchased for a significant refund followed by responsible recycling of reusable parts and proper disposal of those pieces and materials that have no second life. But also early in this mindset of bringing back instead of throwing away should be the 100 million CFL bulbs that just down the road will begin to wink out after several years of service. Here are some CFL recycling options until retailers and communities work out the details.

Fuel or Food? I’m not a great fan of ethanol from corn. Or sugar cane. The agri-business conglomerates see dollar signs. And yes, we need to attain energy independence. But there is a right way and a wrong way to supplement fossil fuels (which are ultimately also bio-fuels, if you think about it) and we need our political power as voters to move this up-and-coming industry in the right direction. Mere market dynamics that don’t include a strong push toward energy efficiency will not favor the environment or the little man.

The biofuel potential will only be realized if governments everywhere push for energy efficiency and thereby reduce the need for massive farming for fuel. Daniel Kammen, a professor in the Energy and Resources Group at University of California, Berkeley, writes, “If the entire U.S. vehicle fleet were replaced overnight with (plug-in hybrid electric vehicles that combine internal combustion engines with electric motors and large batteries for recharging from an outlet) the nation’s oil consumption would decrease by 70 percent or more, completely eliminating the need for petroleum imports.”

If the world–but especially the United States–takes advantage of existing possibilities for energy efficiency and designed biofuel policies to protect the environment as well as farmers and workers in the industry, then the potential for biofuels is rosy. If, however, we continue to leave the development of biofuels to big corporations and the free market, the biofuel dream could warp into a social and environmental nightmare. Source

Fusion or Parallels? I’m actually going to lay hands on a Mac Pro later today. No money will change hands. One question I’ll ask (and I’m asking any of you with opinions or experience): which of these two virtual machine emulators is likely to be the front runner in March when I actually purchase a Mac Pro?