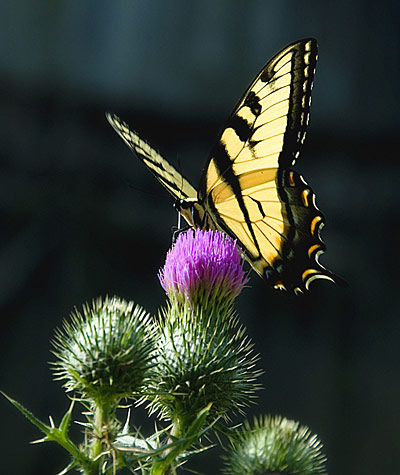 ** It’s been an odd butterfly year. For a long while, all that showed up was the blue-black Spicebush Swallowtails. They usually hang out about one to one with their yellow kin, the Tiger Swallowtails. They were out of sync this year, don’t know why, but the Tigers are making up for lost time. Larger than their competitors, they gang up two and three per cluster on the butterfly bush. Tthe one pictured is sipping from a thistle–since the picture was taken whacked down before it could set seed–over on the creek with the shadow of the barn in the background. Today, the first Monarch showed up on the bush outside my window while I was talking to my mother in Birmingham, Alabama where it was 105 degrees at 3 pm. I hated to tell her the house here was 73 without AC.

** I have not been very impressed with the precision of choice for Google’s supposedly context-relevant ads placed on Fragments, and when a certain strident anorexic hyper-conservative blond showed up in my sidebar over the past week, I was about to pull the plug on ads altogether. Thanks Gary, for reminding me that specific sidebar ads can be banned. The good fairies have visited with increasing frequency of late, bringing the site back towards paying for the monthly DSL, so I’m glad I didn’t pull the plug. Good ol’ fairies.

** Software Suggestion #1: Raima Radio. Neatest feature is that you can record to mp3 directly while listening, for a single song, or until you say stop or run out of memory. Not all that stations listed actually work, but enough do for me to grab some Oldies not in my collection that will end up on the iPod. Lots of classical stations as well, many complete with cover art and album tracks listed.

** Software Suggestions #2: Increasingly, software means Web 2 online programs, and this one is of that variety. I have dabbled with mindmapping software since way back. Most are just too clunky or slow not to slow down the flow of ideas in a “brainstorming” session. MindMeister, in addition to being fully collaborative so two or more can share the storm, is very fast, and a simple double click sets a “child” idea. If you’re a visual thinker, check it out.