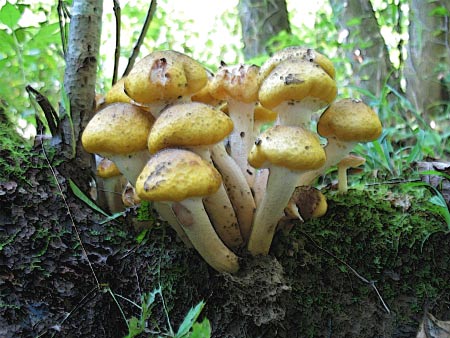 Â <> Stopped at a light almost all the way from Goose Creek to her work in Blacksburg, the girls in the car in the other lane were frantically jabbing their fingers in the direction of Ann’s car roof. What are the little walking motions all about, she wondered, as the college girls walked their hands in pantomine and laughed. Then the wife realized she’d traveled twenty miles with her rubber boots on the roof of the Subaru.

<> “Did you know there’s a salt block up on the ridge” she asked, pointing to the high wooded property line that divides us from the absentee neighbors deep valley. No, I didn’t know it and I don’t care for that kind of premeditated trespass one little bit. We give permission to hunt to those who ask (a few neighbors who have long hunting histories here and good sense and common courtesy) but those who think that when hunting season comes, all property is common land to use at their discretion to drink, shoot, leave trash and cut the antlers off a carcass and leave it in our creek–those are the kind of people that tarnish the reputation of hunters at large. It only takes a few bad apples.

<> Retrieved a call at home fromÂ  work on Friday last. “Please call #### regarding unusual activity on your credit card.” A few of the transactions were mine, but most were not. Strangest thing–they were small charges mostly, less than $5 and a total of may $150. So that card gets trashed, and for all the places online where that number was stored to make it easy to order, it will not be as easy. Still, we’re thankful to the alert from VISA. Coulda been a whole lot worse.

<> We have a bucketful of butternuts sitting on the kitchen counter. (If I wasn’t so lazy yesterday I’d have taken a picture.) Butternut, also called white walnut, produces a fruit with a husk resembling a walnut, but shaped more like a football, and smaller in weight per fruit. We have at least two living specimens near Nameless Creek but this is the first time we’ve gathered nuts, so can’t say anything yet about the nutmeats. The species is being wiped out (what forest tree species ISN’T?) but a fungus called butternut canker.

<> I’ve heard it from several sources lately, so if it’s a farmers’ almanac kind of thing, you can take it for what it’s worth: because we’ve had such an incredibly productive year for berries, nuts and other fruits, this is nature’s way of preparing the wildlife for the correspondingly difficult winter ahead. I have yet to consult the woolyworms for their pronostication.

<> The ultimate goofy web app: email alerts to carry your umbrella via an “Umbrella Today” alert. Ours, thankfully, says YES!