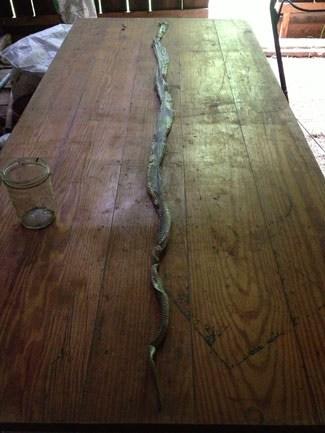 â–¶ ItÂ  feels like irresponsible neglect, to leave a garden when it has, at last, finally started to grow vigorously at the same time the insect invaders first appear. I feel less conflict over being gone for a week as the grass grows, lawns for me being somewhat an object of guilt rather than of pride. Would that we saved the gas and the time, or at least had a product other than bags full of grass clippings. Not that I’m not thankful for the grass clippings mulch in the garden.

I’m happy to say that, while we had a few more inches of rain the week we were driving to or from or actually in Missouri, things are not too far gone that I can’t regain some measure of control.

â–¶ Thankful for: RainX and Michelin HydroEdge tires. The drive across Knoxville was through the hardest rain I’ve ever driven in. White knuckles for sure.

â–¶ Little Peeps–the name the grand daughters gave the GMO birdlike creature–did not survive our absence, but succumbed to one of the largish black snakes we tried so hard to either relocate or prevent from getting in the coop at night. The six foot reptile (Exhibit A above perhaps) got down its meal as far as the head and neck, suffocating the bird, before it gave up.

â–¶ Make a Wish Foundation funded a hot tub, because baby Henry so likes the water, and his therapist recommended it. Thursday, I got in with him and his dad. Henry really seemed to enjoy the gravity-reduced environment, and started flutter kicking the minute he got in. It is the one place he can feel a little bit free of the burden of his body.

â–¶ We did have an encounter with ticks when we hiked a few miles in the woods near Columbia with our son. We each came home with a dozen or more of the smallest ticks I have ever seen. Then when we finally got home to Virginia and made a victory lap around our pasture, we brought home some more.

One, I only discovered in the shower–a larger one at a place that, well, my abdominally gifted brethren have not had a clear view of that part of their anatomy in the shower since 100 pounds and 10 waist inches ago. My particular parasite had dug in rather securely while waiting to decide to spelunk.

I’ll have to ask my MD friend if he’s ever encountered orifice-burrowing ticks living and feeding where the sun don’t shine. Gives one pause.

â–¶ Many thanks to the astute blog reader who noticed no posts here for a week. And good to have contact even during that hiatus from a new reader from Chatham who blogs at PracticingResurrection.