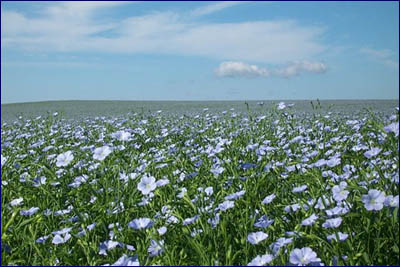 It has been in use for more than 5000 years: for wrappings of mummies; for the earliest written pages and today, the very best painting canvases. It’s fibers are so strong (three times stronger than cotton) that the Greeks used it, layer upon layer, for their shields. If it were not so difficult to produce in quantity, it would still be the most widely used fiber; cotton replaced it only after the gin was invented.

A quarter of the fibers in the next dollar bill you touch consist of it. I slept on it last night, wore its cool fabric in dress slacks to an important meeting on a hot day this week. Its oil is used routinely in paints and varnishes.

The lovely blue plant we occasionally see escaped to interstate right-of-ways and waste places and from which these fibers come is FLAX, whose tall, thin stalks are the source of LINen fibers. LINE-n: the plant so named (genus Linum) because its fibers were naturally so straight and up to four feet long that they were used to determine a straight LINE (already a Latin word “linum”).

It’s fibers aren’t scratchy so it became commonly used for the LIN-ing of wool garments. LIN-gerie was commonly made from its soft and pliant threads, and the LIN-oleum of your childhood kitchen floor used LIN-seed oil as a chief constituent.

This morning, I sprinkled flax seeds on my breakfast cereal for the Omega-3s to help my joints, and wondering about exactly what I was consuming, and as you see above, I munched and browsed and got a mouthful of information to share!