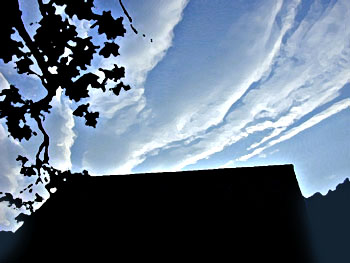 It is August at last. True, there may not be much difference in day or nighttime temperatures yet. But here in the mountains, we can typically expect a tantalizing preview of the coming season during the first half of this month. There are ‘signs of fall’ already, if you know what to look for.

Many of autumn’s wildflowers have emerged, though they are small and inconspicuous and most haven’t bloomed yet. It will be another few weeks before you’ll notice them as you drive along the back roads. But it is part of the pattern of things that the goldenrod, Joe Pye weed, and ironweed will become the dominant vegetation soon, adding rich deep yellow, dusky mauve and royal purple to the pallet of color in every meadow and pasture border.

Soon, the starlings will grow restless. They’ll congregate nervously in a few trees here and there, as if they are both attracted and repulsed by each other in a such a mob of squawking voices. Not one among them knows where they are headed or why–only that something big is about to happen. The instinct to migrate must be a powerful itch.

It won’t be long before an occasional Monarch butterfly shows up on Goose Creek, passing by in loops and glides. In ones and twos, they will lift on the rising heat, winged wisps of will, bound at first in no particular direction and free of hurry. Then, later in the month and unfailingly west, they will glide resolutely toward winter roosts in central Mexico–a pilgrimage in such numbers that their combined weight will break the branches out of their roosting trees.

We should be looking for wooly worms to turn up in the next week or two, crossing the roads of Floyd County in large numbers in their brown and black three piece suits. I’ve given up trying to divine the harshness of winter from the ratio of the wooly worm’s colors. The message I carry away from their thick furry wool is simply that it will be more or less cold before long. A thick black or brown coat like theirs will come in mighty handy then, though it’s hard to imagine in August’s heat.

This month, the locusts and walnuts, last to put on their spring leaves, will be first to take them off. Harbingers of fall, the feather-pinnate leaves of sumac will be among the first to go orange along the wooded roadsides, followed soon by Virginia creeper climbing red up the trunks of trees along the edges of our woods. Both these chameleon color changes will happen well ahead of what will come overhead, later in the poplars, hickories and maples.

Some of the ‘fallness’ that I will feel this week or next has nothing to do with changes in the visible signs of fall. It will come perhaps from an imperceptible sense of the loss of mere moments each day. In the same way that our inner alarms awaken us promptly every morning, my seasonal alarm sounds the call of fall this week.

I’m confident that if you blindfolded me, and spun me around ten times, and placed me anywhere on the calendar, I could tell you “this is early August”, by the feel of it alone. But there are also the smells of the coming season in the air.

On such a day as this in early autumn,Â  I breathe in the new aromas that August aloneÂ  can give–the scent of sweet clover and hay, of corn stalks going but not quite gone by–a potpourri of plant matter in profusion, baked dry by the summer sun. Overpowered by a surge of pasture pollen in mid July, the aromas of monarda and pennyroyal, spicebush and sassafras were wafting undetected on breezes a month ago.

Today I will be looking for them with my nose, and will stop often in the garden for deep drafts of fall-flavored air. â€¨Â This week, or the next, I will look up and declare “that is a fall sky!” when the round piled and billowed clouds of summer for a day or two give way to clouds streaked and smeared, thin, high and stretched with the ends turned up, against a turquoise sky.

Fall will make a few short sorties in August, then retreat, and return again to stay longer each visit. To everything there is a season, and a time to every purpose under heaven. It is time for fall, even though the season has not yet quite arrived.

3 thoughts on “August at Last”