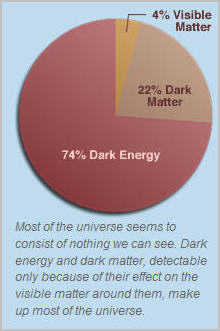 Do you realize how little we know about the cosmos? Indeed, we see through a glass darkly.

Dark matter, yes, I’ve heard of it. We have to postulate its existence because the matter we can see doesn’t account for the effects of gravity we can measure. There must be way more “stuff” out there exerting the familiar attractive force we are familiar with on earth.

But did you know there is also a “dark” (read unexplained) energy more recently uncovered–to the thrill and horror of the cosmologists– that is apparently exerting an effect on that matter of the universe that is OPPOSITE of gravity.

Dark Energy–whatever it is and where ever it comes from–is pushing the galaxies farther away from each other an accelerating pace. The universe is not only growing, but it grows faster all the time.

Recommended: The Hubble Site’s multimedia “slides” on Dark Energy, and the summary page from which the excerpt below and image left were extracted.

“We do know this: Since space is everywhere, this dark energy force is everywhere, and its effects increase as space expands. In contrast, gravity’s force is stronger when things are close together and weaker when they are far apart. Because gravity is weakening with the expansion of space, dark energy now makes up over 2/3 of all the energy in the universe.

It sounds rather strange that we have no firm idea about what makes up 74% of the universe. It’s as though we had explored all the land on the planet Earth and never in all our travels encountered an ocean. But now that we’ve caught sight of the waves, we want to know what this huge, strange, powerful entity really is.

The strangeness of dark energy is thrilling.

It shows scientists that there is a gap in our knowledge that needs to be filled, beckoning the way toward an unexplored realm of physics. We have before us the evidence that the cosmos may be configured vastly differently than we imagine. Dark energy both signals that we still have a great deal to learn, and shows us that we stand poised for another great leap in our understanding of the universe.”