fred Posted on May 12, 2011 Posted in earthcare, Reflections, Travels 1 Comment 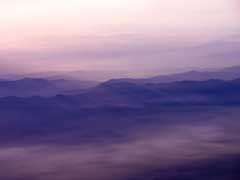 From 30 thousand feet heading west, the little mountain chains that make up the Blue Ridge are neither wide nor long. Civilization’s encroachment north and south appears as a rising tide of pavement and structures among plowed fields and young forests that flank the valley approaches, greening upward to the un-leafed crests still waiting for spring to reach them. And from the altitude of flight, the vastness of being on the ground, enveloped by those forested highlands, looking up, is lost.

Then, this weak relief changes just west of Asheville. The mountain crests rise higher, their slopes more challenging to hold Swiss chalets on the steep mountainsides, though some have to try to make it work, and build there, regardless. Anything for the view, largely now of other Swiss chalets.

And then, below us, there are only mountains, not quite as far as the eye can see. There, in the urban haze to the north, are the pseudopodia of Knoxville. But across an impressive expanse that appeared under us for some minutes, even at 500 miles an hour, were the roadless wilderness expanses (and the occasional access roads, all of which I’ve traversed at one time or another) of the Great Smoky Mountains.

Newfound Gap, Clingman’s Dome, Cataloochee, LaConte, Cade’s Cove, Charlie’s Bunion–all of those once-familiar places crept into view, far below us–the actual territory and not the map. It felt not-real, poised as we were fleetingly above so much familiar landscape I had once wandered. The landscape moving too soon out of sight below us might as well have been a hologram of the Smokies I had loved and known well when we lived in Sylva more than twenty years ago, so much time, too, having passed and still passing by, around or within us, in its ghostly, unfathomable fashion.